According to the cover claim this is the ‘fantastically feminist (and totally true) story of the Astonishing Authors’ of the title. It’s certainly a smashing short biography of three of the most gifted female writers ever.

We start with a pictorial spread that introduces the family and other members – human and animal of the Bronte household.

Thereafter, starting in 1822, the story looks at family life in Haworth, where father Patrick was a priest and the children loved to explore the moors, using them as inspiration for their own stories and poems.

Thrown back on their own company, the four youngsters become incredibly creative and when Branwell is given some toy soldiers, they use them to create their own imaginary world. This leads to dramatic productions, story and poetry writing, illustration and 3D maps all based on Glass Town.

The young people work as teachers or governesses while daydreaming a lot of the time.

Then over the next three years, books of poetry and the three novels – one each – Jane Eyre, Wuthering Heights and Agnes Grey are published under the pseudonyms, Currer, Ellis and Acton Bell., followed by Anne’s The Tenant of Wildfell Hall.

Sadly during the next two years Branwell, Emily and Anne fall sick and die leaving Charlotte who lives only another six years during which she publishes Shirley and Vilette.

The final spreads comprise annotated portraits of Charlotte, Branwell, Emily and Anne, followed by details of how wonderfully feminist were these Victorian sisters. Their legacy lives on and continues to inspire readers today: I can’t imagine being without their awesome novels.

Youngsters will be fascinated to learn of these strong-willed writers and their achievements against the odds, in Anna’s highly readable narrative style biographical account. Her illustrations are a quirky delight

Another truly creative spirit was that of Coco Chanel celebrated in this biography:

Born in 1883, Coco’s early life was spent in a French orphanage where she found the rigid discipline of the nuns very hard to abide by

although she was fascinated by their dramatic, mysterious demeanour as they walked about the convent in their habits.

The young rule transgressor did however learn the sewing skills that later on led to her fame, while at the same time nurturing her dreams, her imagination and her sense of style and fashion.

As soon as she was old enough, Coco left the orphanage determined to follow her highly individual fashion sense and talent for sewing. Taking inspiration from everything she saw, 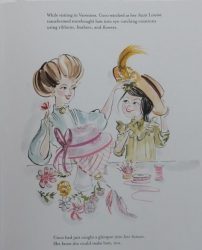 she soon opened two shops, one selling quirky hats, the other stylish yet comfortable clothes. Her designs though were not to everyone’s taste, but Coco with her understanding of what women wanted, was undaunted.

Her simple, rule-breaking designs became however, a huge trend-setting success.

Popular too were her new short hairstyle and her eschewing of restrictive corsets, both of which were practical and revolutionary, changing forever how women dressed and looked. 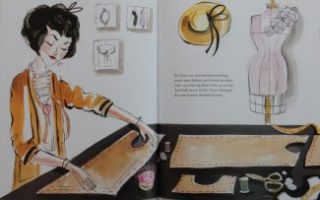 While this story is incomplete, it’s fascinating and inspiring, especially to divergent thinkers; and at the end of the book, the author gives additional background information, mentioning her subject’s wild imagination and difficulty in distinguishing fact from fiction, along with a select bibliography for those who want to dig deeper.

The author’s suitably stylish watercolour, pen and ink illustrations capture the spirit of her subject throughout and the inky endpapers are great fun.