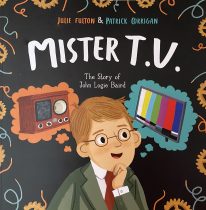 It’s great to see more picture book non-fiction coming from Maverick with Julie Fulton’s STEM story based on the life of one of television’s inventors, John Logie Baird.

John grew up in Helensburgh, Scotland and was fortunate in that his parents filled their house with books. A sickly lad, he was often too poorly to go out and play with his friends so he pondered upon ways he might be able to communicate with them. That led to the linking of telephones from his house to theirs. It worked fine until a storm blew down one of the many lines, causing the driver of a horse-drawn cab to be knocked out of his seat. Additionally when the real phone company discovered his construction, he was ordered to stop. So came plan B.

Then with his mind whizzing away on super-drive he went on inventing – a diamond-making factory (a failure); a never rust glass razor blade (err … they all broke); air bag shoes – POP!; undersocks to keep feet dry – SUCCESS! 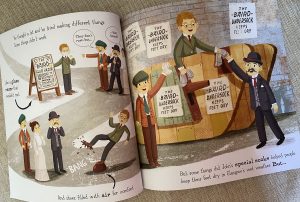 But the result of all this brain overload was a visit to the doctor who prescribed a seaside break.

This though didn’t stop him reading and he learned of someone who’d tried building machines to show real live pictures to people in their homes. Collecting began again (an old electric motor, a hat box, a bicycle lamp, a biscuit tin, a needle, batteries, wax and string). Eventually he got pictures but fuzzy ones, followed by …

until eventually with the help of a strategically-placed doll’s head, the picture was clearer. Then it was time to try with a real person … HURRAH! William Taynton appears live on TV for the very first time in 1925, albeit to a solo audience of one – John.

And the rest is television history … live pictures went from London to Glasgow and New York, and to passengers aboard a ship in mid Atlantic. Then in 1929 the BBC began making programmes using John’s machines, even the prime minister had a TV.

That’s not quite the end of the story for both colour TV and 3D followed. 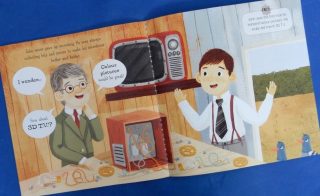 There’s a history timeline in parallel with one for John, as well as fact boxes after the main narrative, the latter being sprinkled throughout the text too.

Patrick Corrigan’s illustrations nicely set the scene in a historical context as well as making the character of John Baird spring to life on the page in similar fashion to how the subject’s televisions sprang into being.

Now if this book’s subject isn’t an incentive to young creative minds I don’t know what is.