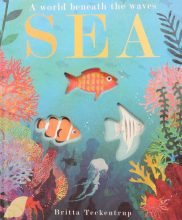 Sea: A World Beneath the Waves
Britta Teckentrup and Patricia Hegarty
Little Tiger

In her latest non-fiction, die-cut peep-through picture book, in a series of wondrous scenes Britta Teckentrup plunges us beneath the ocean waves, way, way down to view the wonders of the deep.

Amid the corals and seaweed fronds we see small fish, sponges, tiny graceful sea horses; a baby dolphin and its mother chirping and clicking in communication, a Lionfish with its poison spines ready to use should it be attacked. 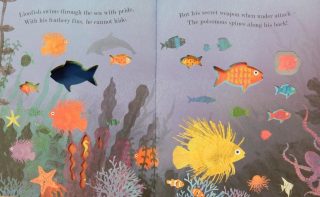 Suddenly there’s a feeling of fear: the fish sense danger as a great white shark casts its shadow. The other sea creatures though, employ their defence mechanisms while the tropical fish swim in formation and all is well.

Night comes and the ocean is a-glow with light; 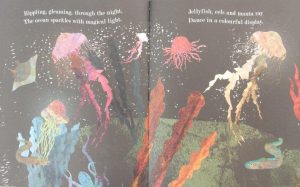 his song echoing far the humpback whale sings for all to hear, the manatee glides through sea grasses and the corals provide safe spaces for small ocean creatures.

Patricia Hegarty’s lyrical text ends with a plea to protect ocean life by keeping the oceans clean and free from rubbish. 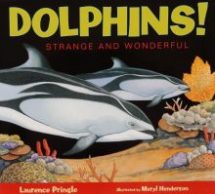 Pringle immediately grabs readers’ attention with his introductory ‘If you were a young dolphin, your mother would keep you close, feed you milk and teach you’ that could almost be referring to a human mother. The remainder of the paragraph however negates that with its ‘Soon you would learn to swim fast and catch fish to eat. And sometimes you would leap from the water, high into the air!’ while his final statement on the first page “People would be very curious about the secrets of your life beneath the surface’ sets the scene for the remainder of this fascinating book.

It covers many aspects of the thirty or so dolphin species including classification, morphology and physiology. There’s a fascinating account of dolphins’ use of echolocation;

another of feeding – dolphins are predators, consuming huge amounts of food daily –

and communication. I learned that in addition to sounds, dolphins send messages with their bodies, sometimes by rubbing skins, at others, by touching flippers.

All this and more is related in the author’s highly readable prose that is superbly illustrated by Meryl Hendersen in watercolour and pencil.

Although it’s likely that this will be read by individuals, this book also works really well if read aloud – a testament to the quality of the author’s writing.