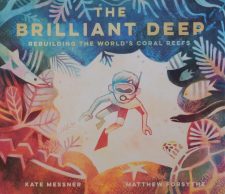 ‘It starts with one.’ So begins the inspiring true story of Ken Nedimeyer, who as a boy was fascinated by the underwater world of Florida Keys, in particular the coral reefs. He became troubled when he discovered that those reefs were fading and dying, seemingly there was nothing he could do to save them.

It was surely worth a try and so Ken went back to his beloved reef and glued six small coral colonies onto the limestone surface of the erstwhile reef.

Month by month these transplants grew and became the catalyst for the Coral Restoration Foundation, which now has international links.

Kate Messner pitches her telling of this inspiring story perfectly for primary school age audiences, telling of Ken’s passion, of staghorn corals grown on the rock farm, of his successful experiments and of the volunteers his inspirational work has recruited, finishing as she began with the upbeat, ‘It starts with one.’

A love of wildlife shines through Matthew Forsythe’s exhilarating illustrations. Using a rich colour palette to portray the undersea world and the divers he takes us right up close to the action making this a great book to share with a class or group and who knows, it might just inspire budding marine biologists.
To that end, the final spread provides details of further reading, websites to visit, ways to help and explanations of some of the terms used in the narrative.