Here’s a handful of picture books, each with a school setting, albeit a somewhat unlikely one in the first three.

First Day at Skeleton School
Sam Lloyd
Bloomsbury Children’s Books
Following on from First Day at Bug School, Sam Lloyd moves deep into the dark forest for her new school-based offering. (Some of my listeners recognised the illustrative style having spotted it on my table and eagerly pounced on the book demanding an immediate reading.)
Skeleton School doesn’t restrict its intake to skeletons though; all manner of creepy pupils are to be found here in this night-time educational establishment run by one, Mr Bones who stands ready and waiting to welcome newcomers (and readers).
I’m happy to see that there’s a school library, albeit a haunted one; but at least one of the pupils needs to learn some appropriate behaviour – maybe she just hasn’t learned to read yet.
The curriculum includes a jingle jangle dance class with the skeletons, how to float through walls, ghost style and spell making, which has some surprising outcomes, not least for Mr Bones.

Sam Lloyd gives full rein to her imagination and in addition to the zany storyline delivered in her rhyming text, provides a visual extravaganza for young listeners to explore and chuckle over.
The endpapers cutaway spread of the school interior will definitely illicit lots of giggles not least over the toilet humour. 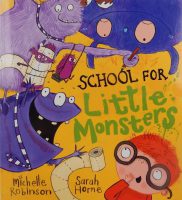 School for Little Monsters
Michelle Robinson and Sarah Horne
Scholastic
Side by side stand two schools, one for monsters, the other for ‘nice boys and girls’. The question is which one is which? And if it’s your first day, how do you know you’re in the right school, especially when some little monsters have been up to a spot of mischief making?
No matter which door you enter, there are some rules to abide by – fourteen in all; 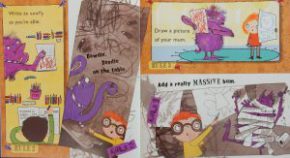 and the whole day is assuredly, a steep learning curve for both human and monster newcomers; and has more than a sprinkling of the kind of gently subversive humour (bums, poo, trumps and bottoms) that young children relish.
Riotous scenes from Sarah Horne showing the pupils’ interpretations of Michelle Robinson’s rhyming rules in this read aloud romp. 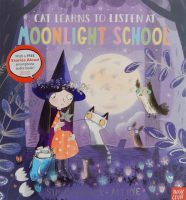 Cat Learns to Listen at Moonlight School
Simon Puttock and Ali Pye
Nosy Crow
Cat, Bat, Owl and Mouse are not newcomers to Miss Moon’s Moonlight School; they already know about the importance of sharing; but listening? Certainly Cat still has a lot to learn where this vital skill is concerned.
On this particular night Miss Moon is taking her class on a nature walk to look for ‘interesting things’. She issues instructions for the pupils to walk in twos and to stay together. “Nobody must wander off,” she warns.
Before long, it becomes apparent that Cat has done just that. She’s spied a firefly and follows it until it settles far from the others, on a flower. 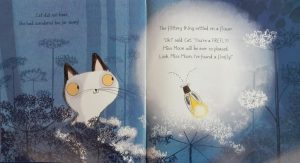 Suddenly though her delight gives way to panic: where are her classmates and teacher?
All ends happily with Cat’s friends using their observation skills until they’ve tracked her down; and the importance of listening having been impressed upon Cat once again, they return to school with their findings.
Ali Pye’s digital illustrations are full of shadows brightened by the moon and stars and Miss Moon’s lantern, illuminating for listeners and readers, the delightful details of the natural world on every spread.
Puttock and Pye seem to have a winning formula here: my young listeners immediately recognised the characters and responded enthusiastically to the sweet story.

Now back to reality:

Going to School
Rose Blake
Frances Lincoln Children’s Books
The pupil here is a girl, Rose, who shares with readers a very busy day spent with friends in their primary school class. There’s certainly a lot to pack in for our narrator, her classmates and their teacher, Miss Balmer: geography, art, English, maths, PE, science, computing and drama.
Fortunately though, it appears to be an active curriculum … 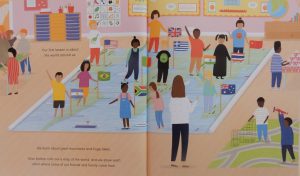 and Miss Balmer reads a story to the children in the “Book Nook’. Hurray!
Seemingly all of the children have firm ideas about their future paths and what they want to become. This is reflected in their choice of activities at work and play: visual clues as to what these are occur throughout the book.
Rose Blakes’s digitally worked spreads are full of visual narratives offering much to interest and discuss, and though this certainly isn’t a first ever day at school book, she certainly makes school look an exciting place to be.

One thought on “It’s Time For School”