D is for Duck!
David Melling
Hodder Children’s Books
We start with magician, Duck, doing a spot of prestidigitation on the opening spread resulting in …

and a King Lion. He is summarily shoved out of sight Narnia style; though what should emerge from the bottom drawer but something equally, or even more, dangerous: it’s very large, has spikes all along its back and often breathes err – well in this case, stars …

There’s only one thing to do and Duck does it PRONTO, with a flick and a swish, causing said ‘something’ to up and vanish: which is not quite the end of this superb alphabet story; the only words of which follow a strict alphabetical order pattern, with the odd aside, stage direction, or spot of direct speech (also in perfect timely alphabetical place). Oh, there’s a speech bubble strategically placed too. And the finale? That you’ll just have to discover for yourself – it’s pretty cool, is all I’ll say on the matter. 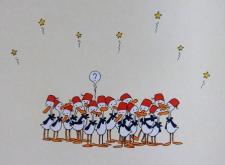 A show-stopping, dazzling rendition by Melling and of course, Duck: not to be missed. Book your tickets NOW!

The Perfect Picnic
Ciara Flood
Templar Publishing
The enormously talented Ciara Flood has followed her terrific Those Pesky Rabbits with another winner and it’s just perfect summer reading.
Meet best friends Squirrel and Mole, a terrific twosome despite being totally different (a bit like Lobel’s Frog and Toad): Mole is the laid back one whereas finicky Squirrel insists everything is done ‘just so’. So when they decide to go on a picnic, Squirrel wants it to be – that’s it – ‘the most perfect picnic ever’.
“No butter on the sandwiches!” insists Squirrel (I’m with you there Squirrel) and of course, butter-loving Mole obliges.

Finally, with picnic bag packed perfectly, the pair head off with guess who carrying the load but …

First stop the meadow but that’s too sunny; the cornfield in contrast is too shady …

(By now your audience will probably be shouting to the pair as they shed more and more items through the hole in the snagged bag.) The bench’s too busy, they have the hill to themselves but Squirrel decrees that too windy; and the river, cave and beach don’t pass muster either.
Eventually Squirrel comes to a halt: seemingly the ideal place has been reached at last (take a look at the map at the back) and it’s then that Mole makes THE discovery – OH NO! (Superb Edvard Munch moment).

Happily all is NOT lost, thanks to a host of animals the friends have encountered along the way: and yes the food’s not quite as perfect as it was at the outset but hey –sometimes make do and mend can turn out to be pretty dam near perfect …

Bursting with subtle humour and oozing with awesome touches and delectable details, this is genius at work. The whole thing’s as pretty near perfect as anyone could imagine and it’s absolutely bound to be demanded again and again (that’s my experience anyway). Most will find their mouths watering at the scrummy, squelchy strawberry cake; my preference though is for Mole’s jaw-stretching sandwich or that unassigned slab of what looks like my favourite, coffee cake.
Ciara’s colour palette (computer photos don’t do justice to the quality) exudes sensations of summer sunny days lying back and soaking in the warmth.  Picnic hampers out and off you go – don’t forget the book though.