This collection of tales comprises ten illustrated wintry tales each by a different author.

From Caroline Juskus, there’s a lively little penguin Pip, eager to improve his marching in time for The Penguin Parade. There’s a rather confused, large hairy ape-like creature wandering around the snowy forest in Guy Bass’s Finding Bigfoot, an adorable seal pup eager to get in on the act in Michael Broad’s Seeley’s Song.

Caroline Pitchers’s story Is of a husky pup, anxious about her first sledge pull as a member of the team;

Elizabeth Baguley tells of a rather homesick little girl, wishing and an elephant, set in India; while Karen Wallace’s story has a fox cub puzzled about the white ‘feathers’ in the garden in the days coming up to Christmas – he certainly has a lot of learning to do about the season.

Malachy Doyle’s Morning Bear is full of wishing, surprises and lots of guessing; The Kitten in the Snow takes a while to acquire a name in Penny Dolan’s chilly tale; Narinder Dhami’s Tiger in the Night has three fox cubs discovering what it means to be a Siberian tiger and Holly Webb provides the final Just in Time for Christmas, telling how little dog Max leaves the rescue shelter and finds a family home.

Just right to snuggle up and dip into, along with a hot chocolate. Young independent readers might want to read one or two stories a day, or spend a whole afternoon/evening relishing the entire book.
More from the final author in:

This one features Cassie, often known as William’s ‘baby sister’ and hence frequently left behind when it comes to the activities of the other older flat-living children. But on one occasion being left behind gives rise to her spotting a little fox on the waste ground close to her London home.

Cassie forms a special bond with the fox cub naming it Frost and feeds it regularly till one winter’s night the creature leads her off on a very special adventure, as they time-slip back to the 1683  Frost Fair on the frozen River Thames. 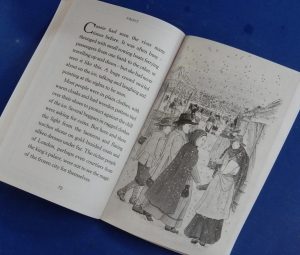 It’s exciting spending time in this other world but Carrie finds herself lost; can she make it safely back to her own time …

In addition to the consideration of urban foxes and the differing viewpoints about these creatures, another element woven into the story is that of the importance of understanding and helping others, herein through Cassie’s developing relationship with her somewhat irascible neighbour, Mrs Morris.

Plenty of food for thought and discussion, as well as a wondrous wintry adventure. (Line drawings from the Artful Doodlers add further atmosphere to Holly’s telling.)