Celebrating the paperback editions of 3 Tate Publishing titles:somehow they all speak a similar message to us in this current crisis:

Wildly imaginative, Joe lives in an ordinary apartment in an ordinary city but in his inner world, plants flourish growing taller than skyscrapers and wondrous animals abound.
Then thanks to reading one night in bed, a seed of an idea is planted in his mind; it’s colourful, aromatic and joyful sounding. The following morning he sets about transforming that idea into reality, starting with an apple seed and some basic tools.

His idea seems to take ages and ages, almost forever; so much so that Joe forgets his seed and returns to imagining colour into his grey existence. But then one daydreaming day Joe spies something outside, colourful and REAL!

Tender care and new seedlings turn that single tree into a stunningly beautiful garden; a garden admired by his neighbours and that ignites his imagination once again.

More seed gathering ensues and gradually the entire neighbourhood is totally transformed into a riot of colour. Just the kind of awesome moment we all need in our lives just now, and the message too about reaching out to neighbours and strangers.

The more you look at this book, the more you see – the detail is awesome; and Sam Broughton’s way of using greyness and gradually bringing more and more colour into her scenes is wonderful, culminating in a glorious fold-out.

Time to get yourself some seeds, go into your garden (or failing that grab some containers), and begin growing something amazing …

The Five of Us
Quentin Blake

This is an enormously powerful story about how five friends, set out for a picnic into the countryside, in a big yellow bus driven by Big Eddie. Now what we’re told about the five is that each of them has a special, amazing ability: Angie can see things miles away; Ollie’s hearing is supersensitive; Simona and Mario are extraordinarily strong and as for Eric – he’s not yet aware of his superpower, but of that  … more later.

During the picnic Eddie starts feeling “ a bit peculiar’ and suddenly the children have an emergency on their hands. Now more than ever they need to work together 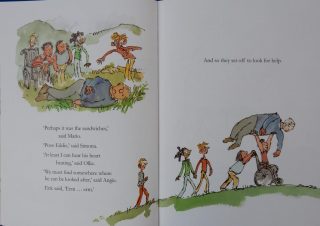 but which of them is going to end up saving the day – or will it be a wonderful collective problem-solving effort.

Quentin Blake’s genius shines forth in every way in this book; his characters are wonderfully portrayed and he leaves plenty of space for readers to bring their own interpretations to the story, though one thing is absolutely clear: do whatever you can – a crisis situation can bring out the most awesome talents in every single one of us.
Written 6 years ago, this is just as timely now – or perhaps even more so. 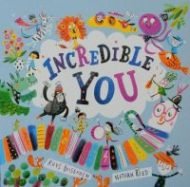 We all have a bad day from time to time and perhaps like the boy protagonist in this book, on especially bad ones, we might wish to be someone or something else.

This boy however, having run through the gamut of ordinary 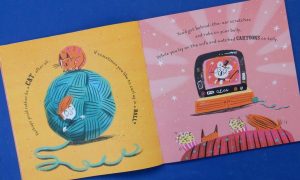 and less ordinary animals and the possibilities offered by so being, comes back round to the senses that he himself possesses and the wonderful wealth of possibilities these can generate.

In short everyone is uniquely AMAZING!

Amazing too is the combination of Rhys Brisenden’s rhyming text and Nathan Reed’s colourful scenes of upbeat characters, animal and human, demonstrating the multitude of ways of being yourself.

Hours of visual stimulus and an abundance of potential talk herein.