In the latest of this splendid biography series for youngsters Ma. Isabel Sánchez Vegara celebrates one of the world’s most favourite children’s authors, Astrid Lindgren, the creator of much loved character Pippi Longstocking.

Pippi Longstocking was the name given by Astrid’s daughter Karin who, when sick in bed asked her mother for a get-better story about a character whose name she had just thought up and those adventures are now children’s book classics that all readers should immerse themselves in.

Back now to Astrid: she had a happy childhood living on her parents’ farm in Vimmerby, Sweden and at a young age developed an insatiable appetite for books and reading, quickly working her way through the library’s entire collection.

She had a rather rebellious nature that became more evident as she began to grow up, getting her first job on a newspaper, and at age nineteen she became a single mother to her son, Lars.

Later she married and had another child, Karin. Always playful, Astrid frequently invented stories. As a 10th birthday present for Karin she put all the Pippi stories down on paper and before long the wise, wild character was famous the world over with Pippi being translated into over 100 languages and becoming a TV star too.

Astrid went on to create other popular characters including Lotta and Emil and was awarded two Hans Christian Andersen medals in recognition for her contribution to the book world.

There was even a planet – Planet 3204 – named in her honour by a Russian astronomer. Awesome! A legend indeed and now her stories live on inspiring new generations of young readers. 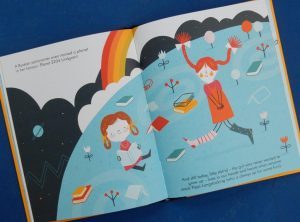 A time line and further information conclude this cracking book.

Linzie Hunter really captures the spirit of both Astrid and Pippi in her delightful, slightly wacky illustrations.