How About a Night Out?
Sam Williams and Matt Hunt
Boxer Books

We join a kitty cat embarking on a nocturnal excursion through the city where  adventures aplenty await. There are friends to meet for a ‘catercall’ upon the wall,

a roundabout to ride upon, birds to scare and much more. A ‘night to sing about’ claims our adventurer but all too soon the sun comes up and it’s time to head for home and some city kitty slumbers.

If you’re thinking night is black, then have another think. You certainly will having read Grant Snider’s poetic nocturnal exploration. Herein he shows us the multitude of colours that a closer look will reveal. There’s blue for a start, ‘a big yellow moon beginning to rise’, the fireflies glowing gold in the park. 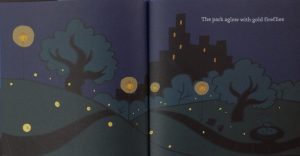 But that’s just the start: there are ‘Fat brown moths dancing in yellow streetlights’, a whole city lit with red neon signs, the green-eyed glow of prowling raccoons, silver stars spilling across the sky above the barely visible countryside.

The silent stillness of his scenes though, is not confined to the outdoors. Inside we see the grey face of a clock, the shapes afloat in the bowl holding a midnight snack are yellow blue and pink; while through the window we start to see the moon’s rings and outdoors once more are ‘all the night’s colours in one moonbow’.

I’m pretty sure that young readers and listeners will envy the sleeping child picked up and taken on a dream flight through pink and purple clouds over the city aglow with colours. Snider offers an ideal excuse for little ones to request a delay to their own slumbers in order to view those ‘colours unseen’.

What Can You See? invites little ones to develop their observation skills as they focus on in turn a table laid for tea, a lounge, the garden, the sky, the jungle, a flower and a host of other focal points to locate the objects named in the relevant verse in Hannah Rounding’s delectable illustrations.
In I Like to Put Food in My Welly, playful topsy-turvies result from putting butter on the bread, pulling a rabbit from a hat, climbing an apple tree and other starting points, each scenario being presented in Max Low’s zany sequences (Did I see two of Max’s popular characters making a guest appearance?)

Engaging rhymes and art: just right for putting across the ‘language is fun’ message to pre-schoolers.