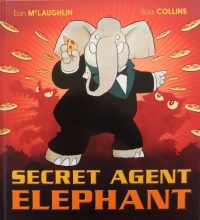 Ever thought about becoming a secret agent? That’s what the large pachyderm in this story has set his sights on; but can he get through the required training course? There’s a pretty rigorous selection process.

The first rule is secrecy about the role: that’s something Elephant definitely needs to do some work on. Hiding is a vital skill but if that’s not possible, perhaps a disguise might do instead … 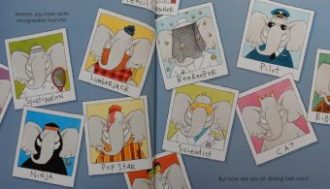 Our elephant candidate surely does look pretty dapper in that tuxedo: seemingly the tailor can after all, perform the odd miracle.

So, it’s ‘Agent 00-Elephant’ welcome to the Secret Service and now on to your very first mission in double quick time before the dastardly feline Vincent Le Morte, notorious international supervillain presses that big red button of his and wipes out the entire world.

No pressure then Agent Elephant. 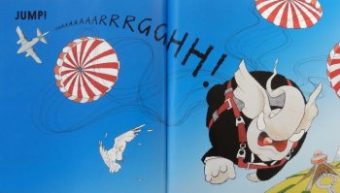 All that’s left to do now is discover the whereabouts of Vincent himself without letting your purpose be discovered.

Agent Elephant gets a sighting so he begins tracking his prey who just happens to be heading for that red button.

There’s the occasional hazard en route – sharks for instance as well as the odd distraction of the edible kind. 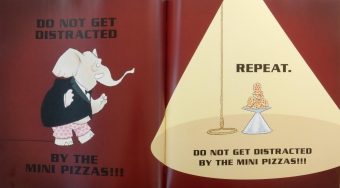 Oh my goodness, it seems as though someone is expecting a visitor but hang on a minute. Could it be that the latest recruit to the spy fraternity might just be about to save the world … 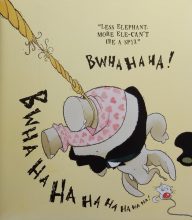 A pizza-fuelled piece of comedy theatre of the tastiest kind is this picture book collaboration between Eoin McLaughlin and Ross Collins.

Every spread is sure to induce giggles and the way the text works in tandem with the visuals is masterful.

Adults will have great fun sharing this with young audiences; I certainly did.