The second in the Children Music Life series showcases a reedless woodwind instrument, the flute. Here flautists from different parts of the world come together to celebrate its magic. It’s a colourful magic that conjures up mellow sounds …

and bright ones; that sometimes speaks very softly …

or blows icily.
It might be a scream of pink, a sigh of lilac that is …

The voice through which the flutes speak is pure poetry; now why not try to discover its sounds for yourself … Where will it take you? What will you hear and see: how will you feel?

With rainbow bright illustrations from Catell Ronca and Ken Wilson-Max’s poetic words, prepare to be transported and perhaps to dance with your little one like some of the characters herein. Through music is a wonderful way to introduce very young children to stories: this little treasure of a book will help you do just that. 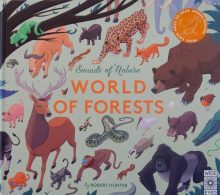 Robert Hunter follows his World of Birds with a new Sounds of Nature title in which he explores ten different forest habitats from various parts of the world – Europe (including the UK), the USA, South America, Africa, India, Socotra Island (Yemen) and China.
Each habitat is given a double spread wherein are showcased the animal inhabitants (with a factual paragraph on each one) as well as a general introduction to the particular forest be it of the coniferous or deciduous kind.
Six or seven creatures are included in each location be that the German evergreen forest; the Redwood forest of California; England’s New Forest; the Amazon rainforest; a cloud forest in the Virunga Mountains of East Africa;

a desert forest of Socotra Island; a beech forest of Brussels;

the Sundarbans mangrove forest in the Bay of Bengal (I don’t think this is at ‘the southern tip of India’ as stated in the book though); the coniferous taiga (snow) forest of Alaska; or the bamboo forest in the mountains dividing North and South China.

Pressing the sound button on each spread produces a ten second burst of the natural sounds of 60 or more animals. You’ll need to listen very carefully to identify such creatures as the squawking macaws of the rainforest or the call of the Northern wren in the beech forest.

The whole thing is splendidly atmospheric: with its beautiful panoramic illustrations and fascinating soundscapes it’s a book that is likely to appeal across a wide age range.

One thought on “Listen! – The Flute / World of Forests”