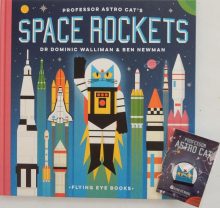 With Brian Cox-like charisma, Walliman and Newman’s Professor Astro Cat blasts off on a new adventure, launching us into space courtesy of the prof. It’s he that describes first, in easily comprehendible terms for young readers, the workings of rockets.

Next comes a brief (and selective) ‘History of Space Travel’ that begins in 1947 with fruit flies, and is followed by Laika (her reportedly ‘painless’ death in orbit is not mentioned), monkey Albert and then in 1961, Yuri Gagarin, the first human space traveller who managed to orbit the earth.

The huge Appollo 11 features thereafter with the famous first moon landing of two of the crew’s three astronauts in 1969. 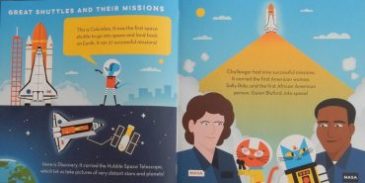 Looking to the future, the final spreads are devoted to NASA’s work in progress, Orion and the Space Launch System; the possibilities of space tourism for ordinary mortals, a brief mention of star travel and on the last page, a short glossary.

In all this, the Prof. is accompanied in Ben Newman’s characteristically stylish retro looking illustrations, by his two pals, the similarly clad feline and sidekick mouse.

Sufficiently powerful to send the youngest of primary children rocketing on their way towards becoming ardent space enthusiasts, and into potential science careers I suspect.