The Colours of History
Clive Gifford and Marc-Etienne Peintre
QED

There have been several books on the theme of colour recently: now here is one that takes a historical approach with the subtitle ‘How Colours Shaped the World’.

After an introduction to the world of colour, there are five main sections: Yellows (which includes orange), Reds, taking in ‘Mummy Brown’), Purples, Blues, Greens and then a spread on ‘Colours that made their mark’ that looks at
kohl black, graphite, lime and lead wash.

Over twenty colours – divided into shades – are explored with each different shade being allocated a double spread that includes an arresting illustration by Marc-Etienne Peintre, related historical facts, associated symbolism and often, a relevant quote. There is also an introductory paragraph for each colour group supplying connotative meanings.

Did you know that the predominant colour of the prehistoric Lascaux Cave paintings was yellow ochre, 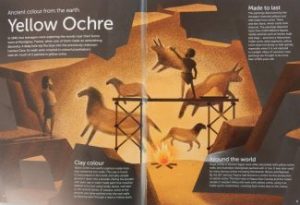 or that saffron comes from a particular crocus species grown mainly in Spain and Iran?
Or that cochineal, still used in some lipsticks, is actually a tiny insect that when crushed, yields a scarlet colour due to the carminic acid it carries to protect itself from predatory ants?

One of my favourite blues, ultramarine, is made by grinding one of my favourite semi-precious gemstones lapis lazuli – a fact I knew, but I was intrigued to learn that the artist Vermeer’s heavy use of the colour in his paintings left him heavily in debt when he died. 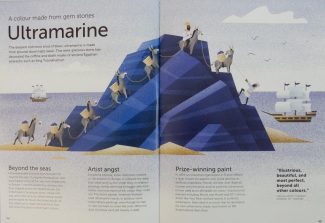 This inviting and rewarding book will be of particular interest to those with a liking for art or history and is well worth adding to a primary school library. 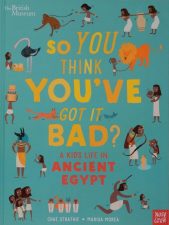 So You Think You’ve Got It Bad? A Kid’s life in Ancient Egypt
Chae Strathie and Marisa Morea
Nosy Crow

Guaranteed to bring on giggles galore is this look at ancient history Egyptian style published in collaboration with the British Museum. It presents history like you’ve never seen or even imagined it before – from the children’s viewpoint.

A variety of topics is covered – clothing and hairstyles, family life, the home, work – parents introduced the idea of work to their offspring at an early age. 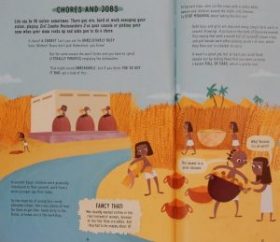 There are sections on education – formal school outside the home was mostly only for boys and rich ones at that, and  diet – raw cabbage was a popular starter and pigeons were often served (along with geese, ducks and oxen if you were well off)

and even children drank beer back in those days.

Medicine and health – apparently the mother of a sick child might eat a mouse and then put its bones in a bag and dangle it around the child’s neck to effect a cure; protection and gods, and fun and games are also explored. Popular pastimes for the young included swimming, boating and games by the river, although, you had to keep a watch out for hungry crocs or hippos. Ball games were often played too, though not football, and the balls were made from papyrus or leather stuffed with straw.

Humorously illustrated with a multitude of labels and speech bubbles, and packed with fascinating facts, yes it’s light-hearted, but children will absorb a lot of information from this unashamedly zany book.