There’s a delightful lesson in the importance of friendship and learning to share in this latest book from talented author/illustrator Fiona Roberton whose books have all been winners with me.
Fang has a favourite toy, an amazing yellow, stripey, squeezy, thing with an aroma of bananas; he loves Sock more than anything else.
Enter Philip with his magnificent shiny red train, which looks a whole lot more exciting than Sock. Being a good sharer, Philip agrees to a swap.

A similar thing happens with the bouncy toy belonging to Simon. But then disaster strikes …

and Fang is left toyless and missing his old favourite.
Is he to be without his beloved Sock forever more or is there perhaps a way they can be re-united.
Fiona’s characters are adorable; her dialogue superb: “What happened to Ball?” asked Simon. “Ball is no longer with us,” says Fang; and the finale (which I won’t divulge) leaves room for the children’s imaginations to take over and draw their own conclusions. 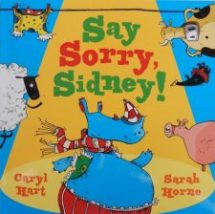 Resident of the zoo, rhino Sidney feels lonely so he decides to make a break for it and heads for the farm.
Once there, the creature starts helping himself to anything and everything that takes his fancy. First he scoffs Mr Potts lunch, then ruins all the washing on Aunt Ann’s clothes line. How wonderfully affronted she looks …

Not content with that he destroys young Emily’s den and smashes all her favourite toys. Even worse, despite their protests of innocence, everyone blames their loss on whichever farm animal happens to be on the scene at the time.
“Rhino? What Rhino? / That cannot be true. / There’s only one rhino / and he’s in the zoo.” Is what the accusers all say to the accused.
Come the evening, those farm animals have had enough; time to confront that rhino and teach him a lesson they decide. 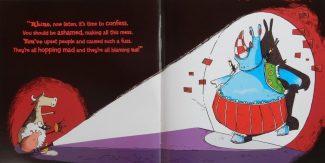 Will Sidney finally see the error of his ways, learn some manners and become a valued member of the farm community, or will it be back to the zoo for him?
With its join-in-able repeat refrain, the jaunty rhyme bounces along nicely and Sarah Horne’s wonderfully quirky characters, both animal and human, are quite splendid.