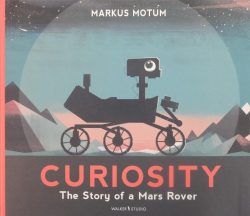 “Wherever you are in the world right now, I’m a very long way away. I’m not even on the same planet as you. I’m a Mars rover.”
So begins this story narrated by Curiosity, the robot vehicle landed on the surface of Mars in August 2012.
Readers are given a behind the scenes look at the lead up to, the planning behind and the building of, NASA’s 2011 mission

to land on, and explore, the surface of Mars. We learn how of the 39 previous missions to the red planet over half had ended in failure. Not so with Curiosity however. Launched from the Kennedy Space Centre in Florida on 26th November 2011,

the journey was successfully completed in 253 days.

So successful was Curiosity’s early work that what was originally to be a two- year mission was extended, and in August 2017 NASA celebrated the 5th anniversary of the landing and the work continues. More questions are asked; some answers are found; further questions are generated.
The information contained herein is detailed but never too wordy and the narrative style ensures that younger readers are not overwhelmed.
Motum’s graphics make it all the more accessible: geometric in form and richly coloured in blues, reds, grey, black and white, they have a clean sophistication that will appeal to adults as well as child readers.
There’s also a timeline and glossary at the back of the book.
All in all, this is superbly put together: it would make a great addition to a school library or family bookshelf, particularly for those who from time to time stand in the dark looking up into the night sky, wondering and questioning …