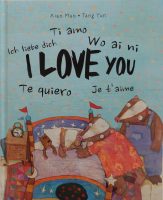 I Love You
Xiao Mao and Tang Yun
New Frontier Publishing
The complete title of this warm-hearted picture book is Ti amo, Ich liebe dich, Wo ai ni, Te quiero, Je t’aime. It tells how a pupil in Ms Giraffe’s class learns her teacher’s favourite words. Ms Giraffe writes them on the whiteboard one morning and asks her pupils what they might mean.

Little Badger’s response is just what she was hoping for: “when you say it out loud, the most wonderful things can happen,” she tells her.
Like all enthusiastic learners, Little Badger practises her new vocabulary, addressing the school, plants,

the weather, a bird, her home and practically everything in it, even a new pair of pants, and most importantly, her Mum and Dad.
It’s a wonderful way of showing young children how much pleasure they can get from showing and sharing love, and by appreciating what they have. Little Badger is one cute character and she gets this straightaway, as well as the fact that to make new words your own you need to use them often. All this is shown in Tang Yun’s wonderfully whimsical scenes wherein perspective is employed to great effect. 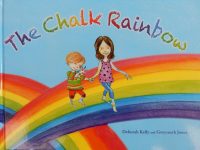 The Chalk Rainbow
Deborah Kelly and Gwynneth Jones
EK Books
Teachers and other professionals who work with children who have ASD constantly have to think outside the box. So it is here with Zane’s elder sister.
Young Zane isn’t like other children. So says the girl narrator of this story: he has a made-up language, likes to line things up and really hates the colour black. You’ve probably guessed by now that Zane is on the autism spectrum.
His family find life can be challenging, especially because Ollie won’t walk across anything black: that means the pedestrian crossing and the family’s driveway. His parents, in particular Dad, are seemingly unaware of the cause of Ollie’s differences and the result is Ollie goes into melt down.

His sister however is more understanding and comes up with a wonderfully imaginative way of helping her younger brother. She starts by drawing a chalk rainbow on the front steps and with his help, extends it right down the drive. The chalk runs out but his sister comes up with a clever way to extend their creative bridge building …

wherever it’s needed and before long ‘there are rainbows everywhere.’

One hopes this story with its themes of accepting difference, trust and unconditional love, will help readers and listeners to try and see things from behind the head of a child with ASD.