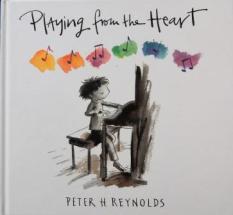 Playing From the Heart
Peter H. Reynolds
Walker Books
There’s a whole lot of heart in this, the latest Peter H. Reynolds story. Herein we meet young Raj who, as a small child, starts as a piano plunker, delighting in every sound … 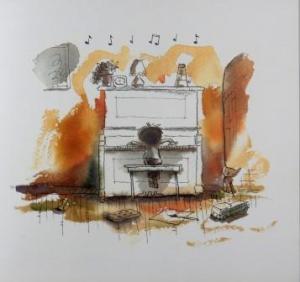 and without lessons develops into a creative player making up his own music. Impressed, his father hires a piano teacher who teaches him the skills and techniques …

but despite his accomplishments, there’s no joy and eventually Raj stops playing altogether.

Raj grows up, leaves home and goes to work in the city. His father grows older and notices the silence left by the absence of his son. Time passes and then Raj hears that his father is not well. He hurries home and his father has a special request: he asks his son to play him a song, not one he’d been taught but that one of his own making – the one that flows straight from his heart. 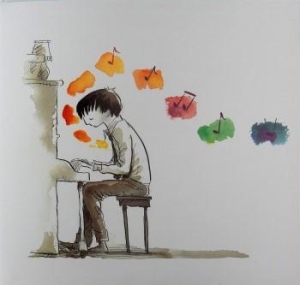 Like his protagonist’s playing, Reynolds surely creates this from the heart. It’s a plea to nurture, rather than stifle children’s natural creativity: to let imagination and enjoyment thereof, not precision and preoccupation with the ‘perfect form’ to lead the way.
Everything about this book is a delight: the hand-lettered text which somehow serves to heighten the intensity of the telling, the mixed media (pen and ink, watercolour, gouache and tea) illustrations. Reynolds’ use of colour too speaks volumes: his palette is limited to browns, greys and blues with a touch of gold and purple except where Raj is in creative mode; then the notes flowing from the piano are brightly coloured ‘whispery and sweet’.
A beautiful and timeless tale, (for parents, almost a cautionary one) that will resonate long after the covers have been closed and the book set aside.

Jack’s Worry
Sam Zuppardi
Walker Books
Jack loves to play his trumpet and eagerly anticipates his ‘first-ever concert’ with his mum in the audience. On the big day however, the lad awakes with ‘a Worry’. And no matter what he does and where he goes, the Worry is right there with him.

So overwhelming is the wretched Worry that Jack finds even playing his trumpet doesn’t shift the thing: seemingly it’s there to stay. Then comes the time to leave for the concert and that’s when the poor boy feels completely overwhelmed … 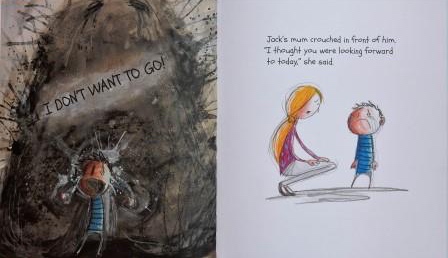 Eventually he confronts the THING and explains to his mum: “I don’t want to play in the concert … I’m worried I’ll make a mistake and you won’t love me anymore!”
Fortunately he has an understanding mum whose reassuring words Jack takes on board and later, even passes on to his classmates: “The concert isn’t about playing perfectly. It’s about having fun and sharing something you love with people who love you.”
By the time Jack gets to school, the Worry has shrunk to tiny proportions and he and his friends  all enjoy their performance tremendously. 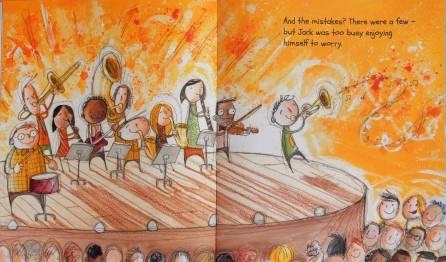 Brilliantly empowering: a cracking book to share with children faced with any potentially tricky situation; and in particular one to help youngsters understand and deal with their anxieties. It’s sympathetic without being sentimental and Zuppardi’s whimsical style illustrations really do capture the intensity of Jack’s emotions superbly well.

One thought on “The Food of Love”