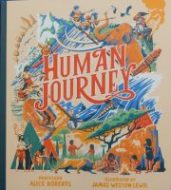 Readers may recall the BBC documentary series researched and presented by biological anthropologist, Professor Alice Roberts about a decade back called The Incredible Human Journey and now at last we have this superbly presented illustrated book Human Journey for children.

In a dramatic telling, that includes sufficient but never an excess of detail, we’re taken on a journey way, way back to the beginning of time to trace our ancestors. Did you know that at the Dawn of Humankind, our early human ancestors lived on the grasslands of Africa some two and a half million years ago?

It’s those people whose migrations it’s possible to trace to other parts of the globe, and that’s what this fascinating, highly accessible book does. We follow the spread of humankind to Asia, then to Australia; then around 50,000 years ago to Europe where Homo sapiens encountered the Neanderthals.

Then come several spreads on the Ice Age after the peak of which, human hunters began to colonise the Americas – first North and then South.

There’s a map at the end tracing the entire human journeys; journeys where there were perils to face in the form of deserts, climate change, oceans, volcanoes, enormous creatures, floods

and even more. Incredibly however, the people adapted and invented, survived and thrived.

If you’ve ever pondered upon what it means to be part of the human race, this book is one to read. It’s one too where, with their wonderful details, the illustrations of James Weston Lewis merit close attention. There’s also a useful timeline and glossary.

For family bookshelves and school collections from KS2 on.

If you’ve ever wondered what your moggy or your pooch’s ancestors long, long ago were like, then this book is for you. And even if you haven’t or perhaps don’t own a pet but are interested in the branch of science that is concerned with fossil animals and plants, called palaentology as is the author Dr Dean Lomax, then this book will fascinate you.

Herein Dr Lomax has selected seven animals, four of which are mammals: representing the rodents is Ernest the guinea pig, the Felidae is Flossy the cat; there’s Toby whose Canidae family first evolved some 40 million years back,

while horse, Pippa with her thick keratin hooves to help her run on both hard and soft ground, is the Equidae representative.

Each of these creatures, as well as budgerigar Lucky, Jasper the corn snake and Goldfish, Bubbles that belongs to a group of ray-finned fish that first appeared some 415 million years back – wow!

Every one has a double spread with a gatefold that opens to reveal, not only lots more fascinating paleontological information including a fossil file, but also an exciting, sometimes alarming pop-out creature, its prehistoric ancestor, which virtually springs to life before you.

Illustrator Mike Love provides the visuals and has done a terrific job in making every page alluring and exciting; indeed the design of the whole book is terrific.

This book is aimed primarily at teenagers and young adults but I too learned a fair bit from it. Indeed, families, educators, everyone really, needs to become more aware of all the factors surrounding clothing and its manufacture.

We’ve all been hearing recently of the horrors happening to people working in the garment industry, particularly those employed by suppliers to the fast fashion sellers.

One of the good things that’s come out of this pandemic is that we’ve had the opportunity to re-evaluate the relationship we  have with the natural world; and considering the impact our clothing choices have on the planet is a vital element of that rethink. 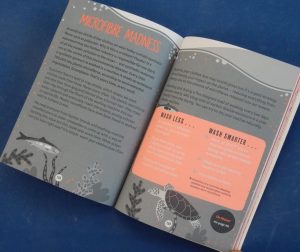 Many of us have been taking stock and looking at what we have stuffed into our wardrobes and drawers. I was shocked at how many items I discovered with labels still attached. Since shops re-opened I’ve bought nothing new to wear, nor did I order anything on line during the lockdown and having read Sarah Klymkiw’s book, do not intend to any time soon.

Hurrah for Sarah and Kim’s creative guide to sustainable fashion. It’s packed full of practical, positive (never preachy) advice on how to become a more sustainable consumer of fashion, as well as the facts and figures we need to know.

There’s never been a better time to change your wardrobe ways – to re-use and repair what you have (step-by-step instructions are provided) or to swap it;

and if you really need something new, then this book will help you make a wise choice.

Prepare to immerse yourself in Timothy Knapman’s tales of five rivers.

Our travels begin on the African continent with a trip along the Nile, at 6,695 km. the world’s longest river. Rising in the African jungle it comprises two tributaries, the Blue Nile and the White Nile, and flows through forests, mountains, lakes and deserts before reaching the Mediterranean Sea.

However its exact source is disputed. Timothy tells readers that one explorer John Hanning Speke declared the true source to be Lake Ukerewe (now called Lake Victoria).  During the trip we learn of festivals, historic events associated with the river, view some wildlife and visit the pyramids, tombs and temples of Egypt.

The second journey is along the Mississippi that extends the entire length of the US all the way to the Gulf of Mexico. This river is home to over 1000 animal species and flows through the site, I was fascinated to learn, of Cahokia, a lost 12th C city.

We’re in Europe for the third journey that takes us from a glacier in the Swiss Alps to the Netherlands where the Rhine’s delta is located.

There are mentions of music and musicians, magic, myths and legends, and sightings of fairytale forests as well as castles, windmills and bulb fields.

High on a Tibetan plateau is where the Yangtze journey starts. We read of dragons and dolphins, glimpse pandas and if the timing is right, see the amazing Dragon Boat Festival.

The Amazon with its incredible rainforest flora and fauna is the river of the fifth trip. There’s so much to discover and I was astonished to learn of Ed Stafford’s walk along its entire length, making him the first person to do so, a journey of 6,992 km that took him 860 days – WOW! Awesome!

There’s much of interest whether yours is history ancient or modern, geography, mythology or something else Timothy includes, and illustrators Aisling Lindsay and Irene Montano show in the engrossing, vibrant spreads that unfold to show the entire length of each river journey.

World stories to wallow in for sure.

Neither of the rivers I’m personally familiar with – the Thames and the Ganges – are included in Timothy’s book; now’s that another story – or many. 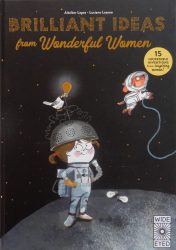 the submarine telescope, diagnostic tests in medicine, the life raft, windscreen wipers and the E-book.

All these ground- breaking inventions came about thanks to the work of the pioneering, creative spirit of the women featured in this book. Each one has made a significant contribution to science or technology in either the 19th or 20th century and they are each given a spread in this celebratory book.

For several of those included, the invention featured is not their only one. For instance Chicago-born Margaret A. Wilcox is credited with inventing the first washing machine in addition to the car heater discussed here; Hedy Lamarr, in addition to WIFI – surprisingly inspired by piano keys we’re told – invented Bluetooth and GPS. And, Marion O’Brien Donovan went on to invent a number of other things – dental floss, a soap dish that drained and a hanger that could hold up to 30 garments – being some of them.
It will come as no surprise to learn that these women inventors all had to overcome enormous odds to get their work patented and marketed, not least African-American Marie Van Brittan Brown the brains behind the 1966 domestic surveillance system; indeed she (and her husband) weren’t successful in marketing their system although many others made fortunes inspired by the original patent. 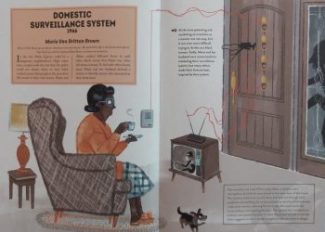 Maria Beasley inventor of the life raft did not have her invention taken seriously until the disastrous Titanic sinking. Maria’s life rafts were on the liner but not in sufficient numbers to save everyone.

All this fascinating information and more is included in scientist Aitziber Lopez’s inspiring book.

I love the way, illustrator Luciano Lozano has cleverly incorporated both the inspiration for, and use of each invention, into his amusing spreads.

This is a book I’d certainly want to have in my KS1/early KS2 classroom as well as recommending it for families who want to celebrate with the children, the achievements of women, and that should be every family. 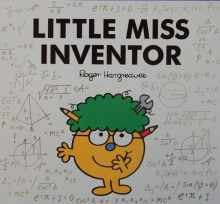 Adam Hargreaves (son of Roger) has created a new Little Miss and who wouldn’t love a book with a young female inventor?

Little Miss Inventor has a brain brimming over with good ideas; ideas that she transforms into inventions in her garden shed. Her self-imagined, self-built mobile house is chock-full of her awesome inventions and she loves to create useful things for her friends as well as herself.

One day however, her brain power is tested to the limit: she needs to make Mr Rude a birthday present; but what can one give to a person who hurls insults at everyone he meets. Can she think of something appropriate and if so what could it be?

Feminist power with a STEM theme and a laugh out loud finale for your little ones. 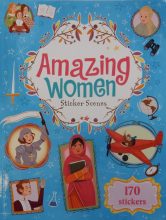 This book contains ten illustrated backdrops  by Isabel Muñoz that include basic key information about ten women who have made in their own fields, significant contributions to society through their achievements in aviation, girls’ rights to education, science, literature, sport, women’s rights and architecture.

In addition there are six pages of stickers to add to the relevant scenes. This could be a good way to introduce the numerous sticker-mad youngsters to these wonderful women.