Meet Rufus, sharp toothed and super-stinky bottomed; an altogether splendid scary monster: not TIP-TOP scary though on account of having nobody to scare.

Off he goes in search of a Peopley Person to roar, rage and rant at, but all he can see in the desert is vampires and a witch. The forest is equally unpeopley as is the ocean and as for the sky, that’s full of spooky characters zooming through the clouds in various aeronautical machines.

Just when Rufus is on the point of giving up his search he hears music coming from a brightly lit barn: surely all that fun sounding noise must be coming from Peopley Persons within.

Seemingly not, for all that meets his eyes is this super spooky party scene … 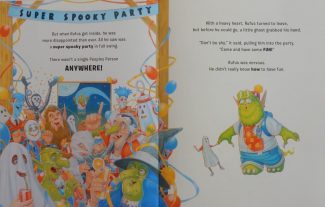 Rufus is about to leave when a small ghost grabs his hand inviting him to have some fun.
Surprisingly, with the ghost’s help, fun is exactly what Rufus has and then comes a revelation … 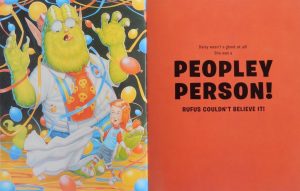 Now Rufus has his chance to become that TIP-TOP SCARY MONSTER he’s always wanted to be. What will he do?

With its surprise finale, endearing protagonist and the unremarked clues scattered throughout Bartram’s bright acrylic scenes as to the possible reason for the seeming lack of Peopley Persons, this is a highly enjoyable teaser of a book.

Jellicle Cats
T.S. Eliot and Arthur Robins
Faber & Faber
In the fourth of his Old Possum’s Book of Practical Cats visual interpretations, Arthur Robins renders the jellicle Cats as total pleasure-loving felines cavorting ‘neath the Jellicle Moon, clad in all their jazzy gear, having first had a sneaky practice of their ‘airs and graces’ while waiting for that lunar object to illuminate their revels. 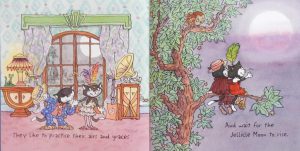 These black and white beauties take their preparations seriously for: ‘Until the Jellicle Moon appears/ They make their toilette and take their repose:’ 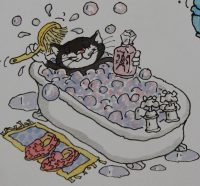 Note the Parisian perfume – just one of the numerous enchanting details that make Arthur Robins’ illustrations such tremendous fun.
Mornings and afternoons are mostly for repose and ‘Reserving their terpsichorean powers’ for the much-anticipated moonlight dancing, adverse weather permitting, that is …

Every one of Robins’ spreads will surely bring a smile to readers and listeners who will delight in the revelry and the action inherent in each scene be it indoors or out.
If you want to encourage young children to become poetry lovers, then share this with them and then cavort like those Jellicle Cats.

What him? No way. The one who’s called “Plunkett the plonker. Plunkett the oinker. The hooter, the honker. The toff who shows off, stands out in a crowd.”
There follows a veritable litany of further protestatory outpourings from our porky pal before he states the obvious: “…there is one sort of pink so divine, so sublime, and the best of it is that it’s already mine, from the tip of my tail to the snoot of my snout, pink is the shade of the skin that I’m in. Pink’s where I end and where I begin.” Thereafter he scoots off to state his case for being in the buff to his waiting host, Priscilla …

and having done so, he proceeds to deliver an exhortation to her other guests to throw caution to the wind and join them in a glorious strip off and plunge party of the wallowing kind.

Then seemingly, a terrific time is had by one and all.
One gets the impression that both Joyce and Polly Dunbar had an equally terrific time creating this gloriously dotty, thoroughly upbeat celebration of being yourself – au naturel – so to speak. Joyce’s – or should that be Plunkett’s narrative – is pure pleasure to read aloud, especially to those who, like this reviewer, enjoy the opportunity to put on a story-telling performance. Young audiences 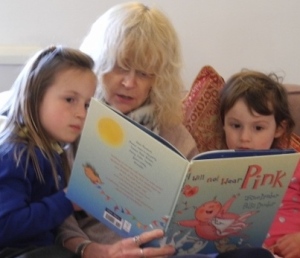 are certain to revel in the hilarious antics of Plunkett and Priscilla as portrayed by Polly in her effervescent scenes.
Altogether a bravura performance by both mother and daughter.

Another lovely picture book with themes of being yourself and friendship is re-issued with a brand new look: 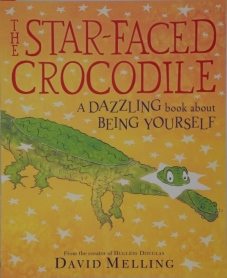 The Star-Faced Crocodile
David Melling
Hodder Children’s Books
This one tells of a developing bond between a banjo-strumming bear and the crocodile of the title, who is not actually star-faced at all but is frightened to reveal his ordinariness to the bear.

The bear however is perfectly happy in the knowledge that the croc. is just a plain, snippy-snappy creature, but goes to great lengths to transform his new friend into a twinkling animal nonetheless.
Melling’s humorous watercolour scenes are sheer delight.