Prepare to be intrigued, startled, uncomfortable, terrified and mesmerised as you follow orphan siblings Jem and Tom through a rip in the air and into the grounds of an other-worldly manor house, Rookhaven and almost into the mind, much of the time, of Jem herself.  She is welcomed by one of the residents, Mirabelle, and thus spends time with other members of The Family while her brother recovers from his sickness.

I’ve not come across the work of Pádraig Kenny before but he’s an enormously talented writer who, in this instance, has interwoven motifs from both contemporary and classic stories producing a book that, rather like the carnivorous flora standing sentry on the Path of Flowers therein,

grips the reader tightly; it feels as though it will become a neo classic. 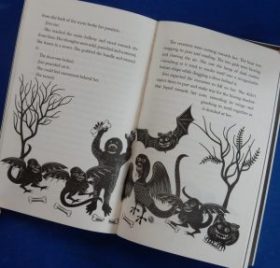 notably Piglet, a misunderstood character who plays a key part in the resolution of the story in a totally unexpected, but wonderful way; and then there’s Mr Pheeps who will certainly make you shudder at the way he manipulates others.

Equally as brilliant as the writing are Edward Bettison’s black and white woodcut style illustrations that show detail but never too much;

and his Flowers of Divine Lapsidy are truly horrifying.

Both timeless and a story of our times, this is a tale of division, empathy, high drama and healing that will make you think and keep on thinking long after you’ve closed the covers of the book.