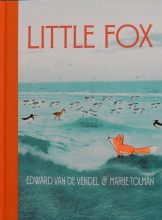 The story begins with a visual sequence of five stunning double spreads showing Little Fox is playing on the dunes among the water birds and animals when he spies two butterflies – purple ones.

The text now begins, telling how he cannot resist chasing after them. His focus, solely on the airborne creatures, causes the fox to plunge over a hilly edge and fall heavily onto the ground. There he lies still, seemingly unconscious.

Then in a dream, his whole life hitherto passes before him as he recalls his earliest time with his mother; 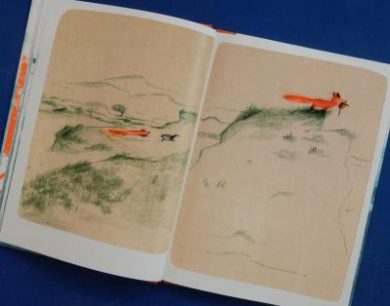 slightly later, playing with his siblings; his adventures in the wider world; his encounters with humans in particular a child; his father warning him of over curiosity, ”Too nosy is dead nosy”, which on one occasion almost turns out to be true. 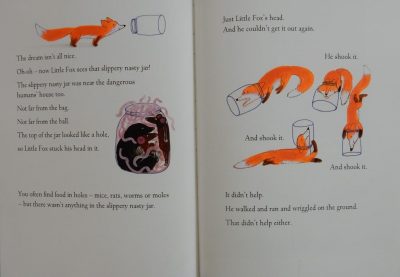 Suddenly the entire narration turns full circle as the child who came to his rescue previously comes upon Little Fox again. This small human picks the creature up and carries it in carefully, followed by a procession of other animals, 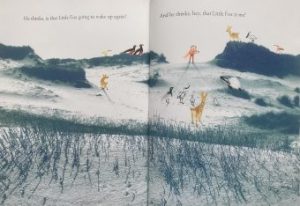 safely back to his fox family, where aroused by the familiar smell, Little Fox opens his eyes once more.

Superb illustrations by Marije Tolman (notes at the end explain how they were created) combined with Van De Vendel’s text (translated from its original Dutch by David Colmer) unfolding stream-of-consciousness style for the most part, make a touching triumph readers will want to return to over and over.

This is the most recent in the author’s deservedly popular Little Animal Rescue series.

One minute young Fliss is playing hide and seek in the forest with her Forest Club group and the next seemingly, she’s in remotest Canada in a polar bear look out.

Outside, surveying her surroundings, she looks through her binoculars and spots a little cub that appears to have been separated from its mother and left behind. She names it Nanuk after the lookout.

By following a trail of footprints and using all her skills and knowledge, can she reunite the mischievous little creature with its mother?

There are encounters with caribou, a fox, a pack of wolves, some Arctic hares, walruses and a far from friendly polar bear family but will Nanuk’s elusive mother be found in time?