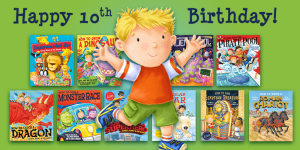 It’s Red Reading Hub’s turn on the Albie 10th anniversary blog tour and today we have a ROAR of a book as our focus:
How to Catch a Dragon, Caryl Hart and Ed Eaves’ wonderful story that begins with Albie visiting the library to draw a dragon for his homework and takes him off on a fantastical adventure with a young knight.

1. Dragons appear in stories from all over the world including India, China, Europe, Egypt and America.

2. Some scientists think that, long ago, people found dinosaur fossils and thought they belonged to dragons. Others think the idea of dragons is based on people’s fear of snakes or crocodiles or iguanas.

3. Chinese culture celebrates the Year of the Dragon every 12 years. If you were born between January 2012 and February 2013 then you are a Water Dragon. Chinese dragons are symbols of luck and good fortune and can fly, but don’t have any wings!

4. The How to Train Your Dragon films started out as a series of books written by Cressida Cowell, the first of which was published in 2003. There are now 12 books in the series!

5. Komodo dragons are real creatures that live in Indonesia. They can grow to 3 metres long and eat insects, birds and mammals.

Thanks to the lovely people at Simon & Schuster Children’s Books, Red Reading Hub has a copy of HOW TO CATCH A DRAGON to give away.

To enter, follow @jillbennett18  RT the giveaway tweet and tag a friend. A winner will be chosen at random and the publicist will send you your prize book (closing date 12th August UK entrants only please)

Look out next week for the rest of the blog tour; there are going to be lots more fun facts and giveaways.

Look out soon for Red Reading Hub’s review of Albie’s latest adventure How to Drive a Roman Chariot – that sees him whisked away to Ancient Rome where, along with a young girl, he finds himself driving a runaway chariot.