Dragon dreamer Tomas is back for a fourth tale. Now his special dragon Flicker has gone to live in his true dragon home in the frosty North and only comes on occasional short visits but the dragon-fruit tree in Grandad’s garden has just produced a bumper crop of fruits and that means more potential dragon adventures.

As this story starts Tomas and another of the superhero squad, Ted, discover an unhatched fruit on the ground that narrowly escapes being squashed to oblivion.

When it eventually hatches, a tiny sky blue and silver creature suddenly whizzes into action appearing to be super-charged as it zizzes about like there’s no tomorrow. There is of course, and one of the things Tomas must do is to nurture all those little dragon-fruit seedlings to keep alive the hope of another dragon-fruit tree that actually grows dragons.

Before long it’s evident that the recently hatched, havoc wreaking blue dragon has taken a liking to Tomas and is sticking with him.  Little sister Lolli, aptly names the creature Zing. 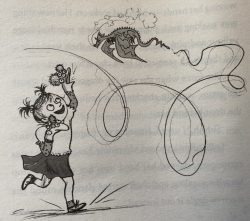 Not only has Tomas to contend with Zing, there’s also the question of his own dragon costume for the school dress up day and then a new girl shows up wearing an absolutely amazing one. 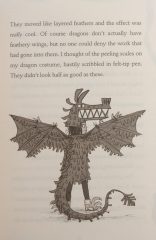 To further add to his troubles, two of the squad, twins Kat and Kai announce that they’re shortly moving to China and next day Aura claims to ‘know all there is to know about dragons.’
Her claim soon leads to an explosive outburst from Tomas.

This results in the revelation of a secret he’d intended to keep quiet about, the details of which I won’t divulge. Instead I’ll mention that streams of sweet-scented farts and a fair spattering of poo are part and parcel of subsequent events. 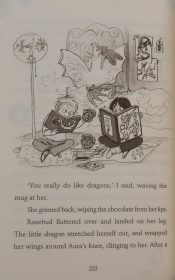 Like the previous adventures, this is a delightful mix of zany humour, warmth, mayhem, touches of magic and more. Once again Sara Ogilvie’s wonderful illustrations add to the book’s appeal and another good thing: by all accounts, the series isn’t over yet.