In these days of physical distancing, self important Bear would most definitely be in serious trouble from the powers that be.

Said creature was anything but a respecter of personal space,  showing no concern for other animals as he perambulated around the forest barging and trampling his way wherever he chose to go.

One day while out strutting his stuff as usual he encounters Moose blocking his path. Unlike the smaller creatures, Moose stands his ground 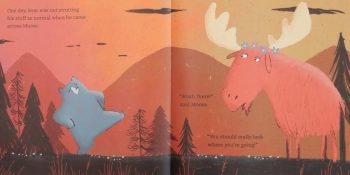 forcing the arrogant Bear to divert from his chosen way and causing him to take an extremely uncomfortable downhill tumble … YEOUCH! … and land unceremoniously in stinky subterranean surroundings.

Pride most definitely came before a fall in Bear’s case.

Talk about humiliation: the other animals are hugely amused but then Moose speaks out.

Perhaps it’s time for every one to pull together, but will that self-aggrandising Bear finally come to see the error of his ways and start to become a bit more community minded?

Alex’s modern cautionary tale is a timely reminder of the power of co-operation especially now when it seems to be the only way forward.