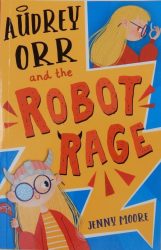 After a decade of competition entering, Audrey Orr’s mother has finally won a competition prize worth having – a luxury cruise to Norway.

Then Audrey discovers a huge problem: the trip is during term time and her aptly named headteacher, Mr Stickler, won’t countenance giving her time off. He even threatens expulsion: Audrey is devastated.

She’ll have to stay at home with her Grandad.

But then, Grandad notices an unlikely advert in his copy of ‘Men’s Knitting Weekly’ from a firm claiming to make robo-twins. It might just be that he’s found the answer to Audrey’s dilemma of how to be both in school and on the holiday at the same time: a robo-supply pupil created by Professor Droyde. Awesome!

Pretty soon, the twin is up to no good switching herself in an attempt to go on the cruise, not altogether a clever idea especially since the Orr parents are let’s say a trifle eccentric to say the least.

Luckily though Grandpa puts paid to Awesome’s plan and the real Audrey departs with Mum and Dad. Or maybe not.

Surely there can’t now be two Audreys aboard. Perhaps the  passenger who said she saw a girl climbing up the side of the ship is delusional. How Awful!

And Awful is how things get as the villainous robot and the real Audrey vie for control.

There are surprises aplenty in this madcap tale that is both funny – think fungal foot infections and balls of knitting wool – and a tad sinister. At the heart of it all though is a loving family and especially notable is the fond relationship between Audrey and Grandad.

High drama at sea for sure, and definitely not of the usual piratical kind, This reviewer’s now off in search of some of those Soft-Scoop 2000 flavours mentioned just a few times in the story.

2 thoughts on “Audrey Orr and the Robot Rage”