Meet Emily, Grace and Layla. Emily’s parents have just bought Mermaid Café; Layla lives just up the hill and Grace’s grandfather is a fisherman. The three team up to rescue a dolphin from a fishing net and find themselves plunging into a wondrously magical adventure with Marina the mermaid princess.

The three girls are unexpectedly chosen as the new Sea Keepers – guardians of the underwater world (a role not needed for hundreds of years). But human Sea Keepers? Humans have earned themselves a bad reputation with the Mer king and queen on account of their ocean polluting, whale killing and fishing, so the three girls will really have to prove themselves worthy of such a role.

They’ll need to confront Effluvia, the evil mermaid responsible for stirring up rubbish storms; she who has set her sights on finding the magical Golden Pearls; she with the power to mesmerise others. 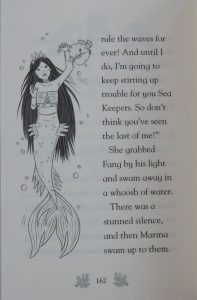 Stop her they must, for the future of the underwater world is at stake; they simply have to find at least one of those magic pearls. Are they up to their task?

With talking sea creatures and much more, this magical story has at its heart the serious problem of ocean pollution. It’ll certainly immerse a certain section of young independent readers, and with still two pearls unfound at the end, this is just the first adventure of the Sea Keepers.

This is the first of a new series by cat-loving author Holly Webb who got her inspiration from stories of real-life museum cats from the British Museum and the Hermitage in Russia.

The appearance of a small black kitten on the museum steps one night has the majority of the feline residents of the museum all in a tither. The creature introduces himself as Peter and kitten Tasha at least, is eager to hear the story of this little scrap of a thing from ’Out There’.

Tasked with showing the incomer around the museum, the three resident kittens lead Peter through the various galleries but when they hear visitors the others hide leaving the newcomer alone.

Tasha returns to find him, taking him on a rat hunt during which they hear strange sounds coming from the Dinosaur Gallery; marauding rats perhaps, or something else?

Disaster strikes as an incident results in the famous T-Rex losing a bone: 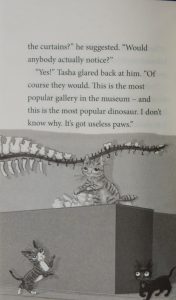 the search is on … Will it be found and will Peter ever feel as though he fits in?

Young moggy lovers especially will lap up this story. Holly Webb has created some interesting cat characters, young and not so young; and Sarah Lodge’s black and white illustrations add further atmosphere and humour to the telling.