Because of some of my personal interests and experiences I was immediately drawn to this large format book: the couple of pre-uni. years I spent working in the herbarium at Kew Gardens, as well as my interest in the healing properties of plants in relation to Ayurveda, and the courses I took in aromatherapy and massage. That’s as well as an abiding fascination with the botanical world in general.

Every one of Hajek’s full-page illustrations is simply stunning in its beauty and witty detail so it’s virtually impossible to choose favourites – there’s magic in them all. Indeed, as Christine Paxman writes ‘In many old children’s books, the bellflower is described as a magic flower.’

However as a frequent visitor to India, I was instantly attracted to the “ginger’ illustration with its stylised dancer reminiscent of Indian miniatures. We read of ginger’s origins in India, China and other parts of Asia and of its many uses in cooking, in drinks and as a medicinal plant. Perhaps you didn’t know (I certainly not even considered it)) that in addition to its many healing benefits for humans, ginger root can be used to treat horses and other animals. 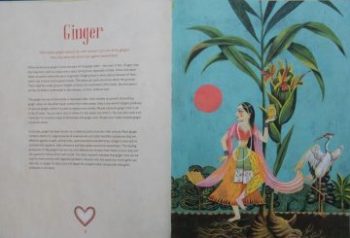 Many of us think of the Dandelion merely as a nuisance weed that’s nigh on impossible to get rid of. We might have sampled the leaves of Taxacarum in salads but I was surprised to read that the flowers can be used to make a jelly and the roots eaten, if roasted first. Moreover, the latex if extracted, can be used in rubber making.

‘Can a flower cure almost anything?’ This is one of Paxman’s introductory questions to Common Mallow. She goes on to answer that, as well as discussing its culinary uses, its uses as a dye and as a potential source of green energy. 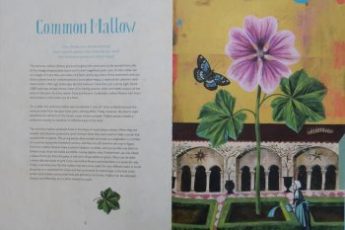 You can dip in and savour every one of the entries: the conversational style of the text and outstanding art will fascinate, and perhaps prompt readers to dig deeper into some of the mysteries of the plant world.