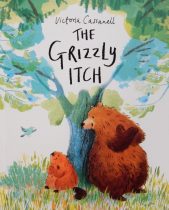 What do you do if you wake from your winter slumbers with an itch? If you’re a bear of the grizzly kind then you’d most likely go in search of a tree for some scratching relief. That’s exactly what Victoria Cassanell’s Bear does in her debut picture book.
There’s a major snag though, in the form of a rather large queue at Bear’s favourite scratching tree. 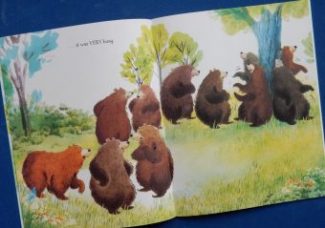 Even worse, when it comes to his turn, this happens … 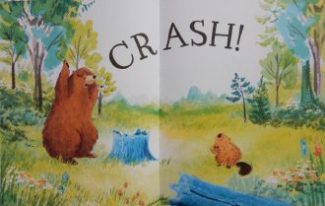 The beaver in question is apologetic and being a beaver, is also fond of trees and familiar with a good many in the vicinity. He takes Bear and together they hunt in the forest.

After seeing several that just don’t cut it as a suitable back scratcher, they come upon one beside the river that looks promising. Up Bear climbs, wobbles along a branch and …

Wet through, Bear despairs of ever finding a tree to do what he so badly desires. Beaver sitting beside him, is sympathetic and as it happens rather more …

By nightfall a firm friendship has been forged: I’ll say no more on the matter, other than this is a delight to read aloud and Victoria’s illustrations are smashing. Her portrayal of both the animal characters and their natural habitat, painted in ‘layered watercolour’ are captivating. I love the different view points especially that of Beaver and Bear looking upwards to the top of the tree Bear then climbs; and that back view of the two animals sitting side-by-side.

Funny, full of heart and a pleasure to read aloud, this story has vital messages about the relative importance of friends and ‘things’, and the surprising things that can happen if you offer help to others.