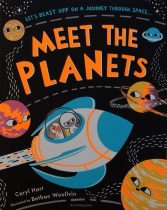 Caryl Hart gives voice to the individual planets as we join a little girl aboard a rocket and zoom off on a space adventure around the solar system.

Our first encounter is with The Sun, ‘the biggest thing up in the sky. /I’m friendly but don’t get too close now / or I’ll frizzle you up to a fry.’ it warns, going on in rhyming speak to inform about its role as daytime warmth provider and light supplier for growing plants before concluding “But be careful, I’m really a /
Great ball of fire – / the HOTTEST and FIERCEST / you’ve seen!”

As the journey progresses little ones will love to join in with the rhymes and  spy all the staring-eyed planets – zippily speeding Mercury, deceptively named Venus that boasts of FIERCE spitting volcanoes, our own friendly Earth with its silvery Moon, mighty windswept Mars with its rust-coloured dust. 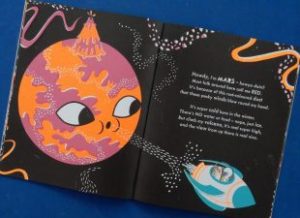 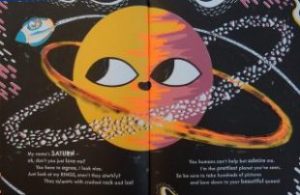 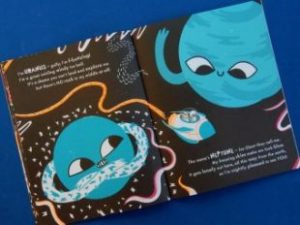 Youngsters will undoubtedly have a total blast as they whizz through the sky, relishing every planet they meet, and even manage to rendezvous with earth once more, just in time for bed. Bethan’s illustrations are, as ever, totally out-of-this-world strikingly brilliant and such a superb complement for Caryl’s cleverly constructed rhyming text.

Splendid stuff this, for bedtimes and all other times too.