The Jewish ‘festival of lights’, Hanukkah is celebrated over eight days and in 2019 begins of the night of December 22nd continuing until the 30th of the month.

The Hebrew word Hanukkah means ‘dedication’ and in this picture book Malachy Doyle retells the story of the reclamation and rededication of the holy temple in Jerusalem after the Maccabees and their followers succeeded in driving the Greek army of King Antiochus back to their homeland.
Unable to find the golden menorah in the temple, Judah Maccabee and his men created a simple oil burner and managed to find only sufficient oil to last a single night. 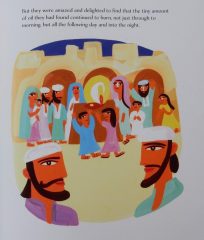 Amazingly though, when they lit the burner it stayed alight for eight days and nights.

The story of the ‘Miracle of the Oil’ has since been passed down from one generation to the next and this is the festival that is commemorated at Hanukkah.

In Jewish homes a special menorah called a Hanukkiyah is brought out. The menorah holds nine candles, one of which is the Shamash (servant), which is used to light the other eight candles. On the first night, just one candle is lit. On the second night, an additional flame is lit and so on until by the eighth night all eight lights and the Shamash are burning. 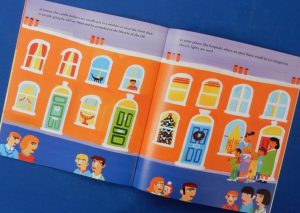 Christopher Corr shows all this in his characteristic vibrant illustrations as well as the traditional sharing of fried latkes, and sufganiyot (sweet, jam-filled doughnuts), and the dreidel game that children play. 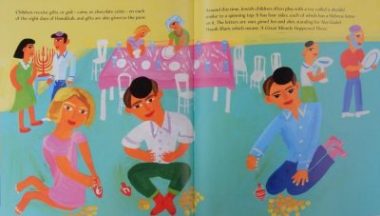 This is an ideal picture book to share with primary age children to introduce them to the Hanukkah story and associated traditions, either in RE or for an assembly.

One thought on “The Miracle of Hanukkah”