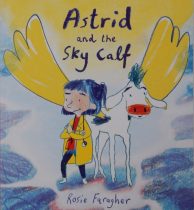 This is a truly magical story about a young doctor and a very unusual, special hospital. The doctor’s name is Doctor Astrid and she runs The Hospital for Magical Beasts. Thus far there’s not been a single untreatable patient or incurable illness at her hospital but that changes when a new patient suddenly arrives, a sky calf no less.

Doctor Astrid does her very best to diagnose the problem but none of her usual methods are any good at all. She’s bemused and frustrated, doubting her own skills, and her patient is far from happy. Surely there must be something she can do to restore the sky calf to her usual healthy self.

Happily there is, but it’s not sticky tape, potions or bandages: rather, the successful treatment involves showing empathy and friendship.

Full of heart, this is a sweet story beautifully illustrated by Rosie the author in a delightfully scribbly fashion. Adorable! 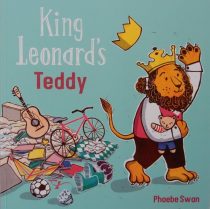 Wealth and consumerism reign in King Lion’s world of use once and throw away; life is peachy so he thinks, merely sending his servant out to buy a replacement for anything that breaks or even gets dirty. Not once does he consider the idea of the environmental impact of his lifestyle.

But then his beloved teddy bear is broken one night. This is something irreplaceable so what can he do? The toyshop can only sell him a new one, the toy factory only manufactures brand new bears and all the repair shops have long since closed down.

Back home a further accident happens and this gives King Leonard an idea: perhaps he can fix the bear himself. It’s not an east task for sure but eventually determination wins through and what’s more the king has learned a host of new skills that he can use for the good of the whole community.

A delightful story that has a strong and very important environmental message that is never too soon for young children to hear. To that end King Lion and his trusty helper Max have compiled a final spread of ideas for reducing, reusing and recycling items to help the environment. Love the bold mixed media illustrations that really help increase the impact of the telling. 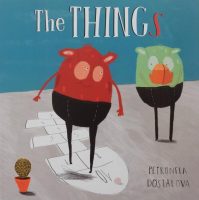 This is a somewhat surreal tale about  Thing. Thing has a best pal, Cactus, actually make that two best friends; the other is Moose the shadow puppet. Thing loves spending time with these two; he even talks to his prickly friend in bed.

Life ticks along well in its uneventful way until one day Thing discovers another Thing nearby. Thing 2 also has two friends Mitten and Mitten. But Thing starts to worry about the Other Thing: could it be dangerous?

Then Moose suddenly disappears and guess who suspect number one is. Nevertheless perhaps working with Thing 2 might help work out what has happened to the shadow puppet. 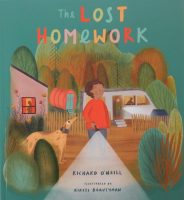 This is the latest of the author’s stories set in a traveller community and features young Sonny.

Sonny loves school and usually gets his homework done on a Friday so he has the entire weekend to spend helping his family and fellow travellers with all manner of tasks.

On this particular weekend there’s to be a wedding – one of his cousin’s is getting married and there’s a huge amount of preparations even before the family leaves for the venue which is 180km away. Over the weekend Sonny uses a great many different skills that involve maths, music making, story telling, ICT and painting. Pretty well the only thing that doesn’t get done is Sonny’s homework.

Happily though despite Sonny’s fears, when he tells the class about his weekend, his teacher shows considerable insight and understanding.

A super story showing that school isn’t the only place where important learning happens; it’s illustrated by Kristi Beautyman whose artwork is truly captivating. 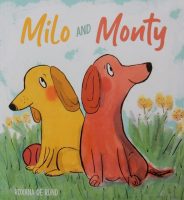 Monty is a sociable animal whereas Milo prefers being quiet and on his own. This behaviour worries the latter dog’s new family.

One Sunday afternoon some cousins pay a visit and Milo goes off to his favourite quiet place but when he gets there, it’s already occupied – by cousin Henry. It seems that Henry and Milo have much in common – both are tactile sensitive, have special toys that go everywhere with them and like a regular routine.

With new understanding, perhaps if the McKenzie family make some adjustments both Monty and Milo can be happy family members.

A sensitive, warm-hearted tale of differences and learning how to accommodate them with super equally warm-hearted illustrations by the author.