What begins as a rant at a mischievous ‘Rang-Tan’ in the bedroom of a small girl as she orders it to depart, is dramatically changed by the creature’s revelation of how human devastation of its rainforest home in south-east Asia has caused it to flee for its life; and all on account of palm oil – a constituent of the items in her room that the animal has been howling at.

Having learned of the irresponsible actions of her fellow human beings, 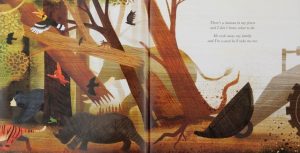 the girl is fuelled by a determination to do something about this reckless deforestation and so she does.

She writes to chocolate manufacturers 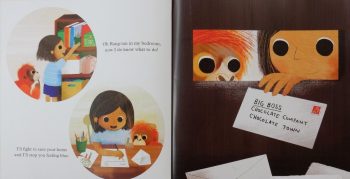 and talks to others about rainforest destruction, enlisting their support in her campaign and ending with a promise to make sure there is a future for animals like her visitor.

After the story there are several pages giving details of the orangutans and their plight; the problem caused by irresponsible destroying of rainforests and over-planting of the palm trees that yield the much-wanted oil, and what we can all do to help save the remaining rainforest habitat in Indonesia. Emma Thompson has written a foreword to the book in support.

Based on the original Greenpeace film that became a recent sensation, James Sellick’s rhyming story speaks powerfully for the cause and has been beautifully re-illustrated by Frann Preston-Gannon whose scenes of destruction take readers to the heart of the problem.

A book that should bring to the attention of younger readers the price paid by irresponsible palm-oil production, enlisting more recruits to the green movement.