A lone astronaut – a little one – arrives on Mars determined to find life. ‘Everybody thinks I’m crazy. Nobody believes there is life on Mars. But I do.’ is what he tells readers.
What he sees though as he wanders around the dark, cold Martian landscape clutching his box of chocolate cupcakes (an offering for any alien he might encounter), is a planet seemingly devoid of life.

The visitor starts to have doubts about finding any sort of life form, while unbeknown to him there’s a large creature following not far behind keeping a close watch on the explorer.

Having abandoned his box of goodies, the disillusioned little human decides to return to his spaceship. But where is it?
Lost he might be, but his search yields something exciting …

along with his box of cupcakes.
(I held my breath when I saw that the little astronaut had picked that yellow flower; I hope it isn’t the only one on the entire planet.)

Now, flower and box in hand, he is all the more determined to locate his spaceship, which he does by scaling the ‘err’ mountain.

Then, mission accomplished, when he’s inside and homeward bound, it’s the perfect time to tuck in to one of those yummy chocolately confections … 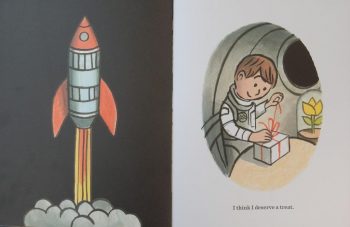 Witty, ironic, thought-provoking and with that surprise ending, Agee’s offering, with his stark Martian scenery, is eminently re-readable. Children love to be in the know about stories and as they listen to the young astronaut’s earnest narration, they’ll be hard put to resist yelling “he’s behind you”.