It’s always good to discover new publishers so Red Reading Hub was excited to come across Wacky Bee Books to whom thanks for sending these for review. 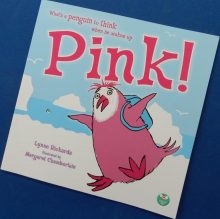 Patrick is a penguin, a pretty ordinary young penguin until one morning, shock horror; he wakes up and discovers he’s turned pink overnight.

Dr Black is no help suggesting that he tries getting used to his new hue. “But I’m a BOY! And BOYS CAN’T BE PINK!’ is his response.

At school, his fellow penguins tease Patrick until he’s had enough. Deciding he wants to fit in, he packs his rucksack and sets off to find the African flamingos his Dad had showed him in a bird book.

It’s a seven-day, seven-night swim but Patrick is a powerful swimmer and on day eight he reaches his destination.
The flamingos are friendly, inviting the newcomer to join them for lunch; but the visitor’s beak is all wrong, so things go very badly. 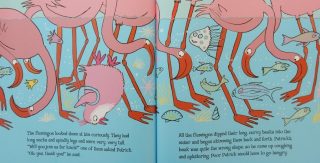 The same is true when Patrick tries out other things flamingo, like standing on one leg.

Patrick realises he doesn’t fit in here either. 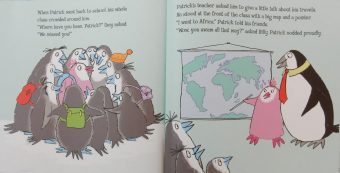 Back home he swims. His parents welcome him; and then to his surprise, so too do his schoolmates. Indeed they’re mightily impressed by what their pink pal has to tell them about his travels; now being pink is cool.

Acceptance rules: not only Patrick but also his classmates have realised that real friends love you no matter how different you might appear on the outside.

With Margaret Chamberlain’s characterful illustrations, Lynne Rickards’ story of Patrick’s learning journey will help little ones both at home and in early years settings understand that diversity is something to be celebrated, as well as help challenge gender stereotypes. 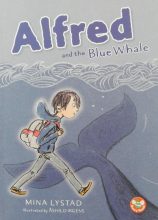 This is one of the publisher’s Buzzy Reads titles for those readers just starting to fly solo and has been translated from the author’s original Norwegian.

Young Alfred is scared of lots of things, but his worst nightmare is speaking in front of the class. Imagine how he feels then when he learns that everyone must take their turn to talk to the others about the animal named on the paper his teacher gives them.

Alfred’s animal is the Blue Whale and all he wants to do at the thought of the following Friday is to hide away.

Little by little though, he starts collecting information about the creature and the more he discovers, the more interested he becomes, so much so that he forgets about his nerves … 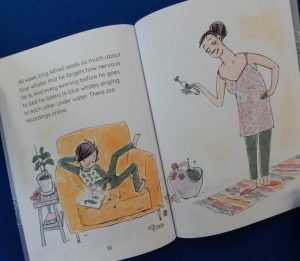 But then those scared feelings come flooding back. Can he summon up the courage to share all that Blue Whale information he has in his head with his classmates?

The author seamlessly includes a number of easily digested Blue Whale facts in her very readable story about facing your fears and self belief. (There’s also a final double spread fact file.)