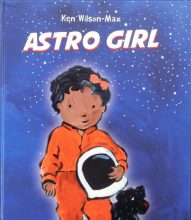 Space and stars enthusiast Astrid wants to become an astronaut, so she tells Jake her best pal as they lie stargazing.

She goes on to tell the same to her papa over breakfast.

He challenges her assertion with comments about orbiting the Earth in a spaceship, dining on food from tubes and packets, becoming used to zero gravity, conducting scientific experiments … 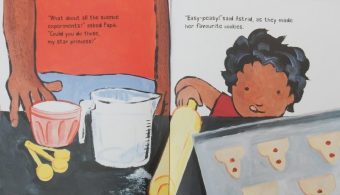 and sleeping alone among the stars: he seems pretty knowledgeable about life in space. Astrid assures her Papa that she can manage all those things even the solo sleeping.

The day comes for the two of them to go and collect Mama in the car. 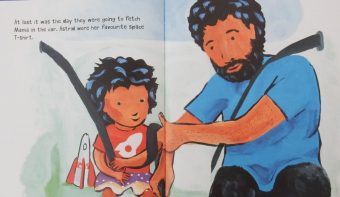 It’s then that we discover the possible reason for Astrid’s enthusiasm about space and her Papa’s knowledge.

A joyful reunion takes place and thereafter the little girl starts reading avidly to learn as much as she can about how to achieve her ambition, and about some of those trailblazing astronauts who went before, several of whom were women.

Simply and beautifully told, Ken keeps readers interested in the theme by showing us space related items such as Astrid’s t-shirt, her breakfast cereal, Papa’s T-shirts, the cookie shapes they bake together, pictures, a toy – all of which help in the build-up to the grand finale.

A smashing book for young space enthusiasts and perhaps to share on Father’s Day.

For a younger audience is: 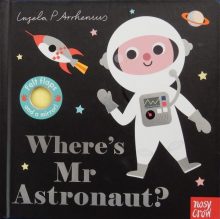 Vibrant, immediately appealing illustrations characterise Ingela P.Arrhenius’ latest title for the ‘flaps and mirror’ series in an amusing introduction to space exploration for the very youngest. 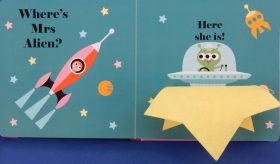 Mr Astronaut and finally, whoever happens to be looking in the mirror tucked beneath the felt moon flap.

This one’s sure to add to the deserved popularity of the hide-and-seek series.