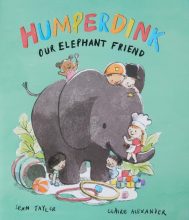 Storyteller Sean gives the impression he’s spent time standing behind the heads of young children, observing carefully, so he knows what they’d do should a playful pachyderm burst through the door of their playgroup.
That is just what happens in this book and straightaway the children attempt to accommodate him in their play, be it dressing up, hairstylists …

hide and seek or something more energetic. No matter how hard they try though, things keep ending in disaster.

The children then change tack asking Humperdink what he likes to play and before you can say, ‘come outside’ he’s led the little ones outside for some exceedingly satisfying elephant-stomping, stamping and stumping, 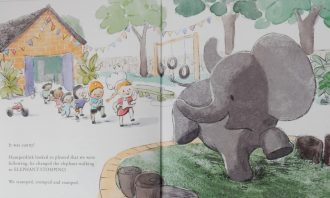 After all that romping Humbert is ready to settle down into something equally creative but rather less energetic; though of course, he and his new friends are always up for a jungle foray.

The joyful exuberance inherent in Sean’s telling is wonderfully echoed in Claire Alexander’s scenes of the characters’ imaginative play. Clearly she too spends time observing little ones – their joie de vivre, their intense concentration on whatever they’re engaged in, and the way their open hearts are sensitive to the feelings of one another, empathetic and full of love.

Perfect for story time in a playgroup or nursery and at home with little ones, this is a book that’s bound to be requested over and over.