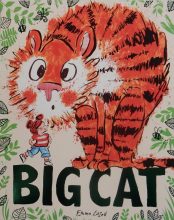 The small girl narrator and her gran’s search in the back garden for Grandma’s missing specs yield not the glasses but a ginormous moggy.

It isn’t Ruby, Gertrude, Hufflystink or Twinklywhiskers so Grandma decides a closer look is necessary. She’s mightily impressed by what she sees … 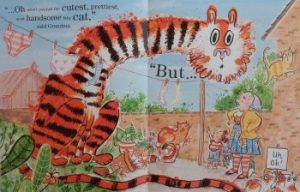 but there is no way they can keep the cat and so they ask their neighbours if it belongs to any of them.

The answer is a big fat no and so Big Cat becomes a resident with Grandma and her other feline friends; but as she says herself, she really does need to locate her specs. 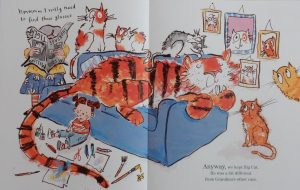 The newcomer proves enormous fun and extremely useful. The only trouble is, the supplies of cat food dwindle very quickly no matter how many times they’re replaced. It’s not just the cat food that is vanishing though, it’s the human’s food too.

One day the doorbell rings: who could it be? Not Gran’s replacement glasses as they’re due to be ready tomorrow.

There on the doorstep stand two strangers, one clutching some specs and asking if they happen to belong to Grandma.

They do, and to show her gratitude, she asks them in (somewhat unwisely you might be thinking) for tea.

Fortunately however, the visitors are very well-mannered and a friendship is forged between them and the narrator. 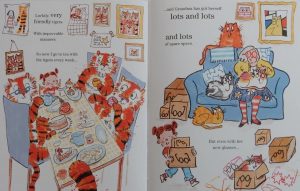 As for Grandma, she has invested in lots of spare specs but even then, there are things she misses; but that’s a whole other story…

With visual references to Judith Kerr’s classic The Tiger Who Came to Tea, Emma Lazell’s debut picture book is funny and somewhat surreal. Observant readers will notice the whereabouts of the missing glasses on the very first spread and will in addition, delight in other visual ‘clues’ as to what is going on throughout as the chaos increases.

A feline frolic of the first order.