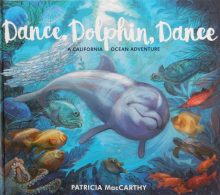 Out in the surging, swishing swooshing ocean, deep down in the kelp forest, is playful Dolphin. He dances with a shoal of sardines and the sea lion;

then as the sea becomes rougher, the tuna.

As he dances over a big Blue Whale …

The shark attacks but moving faster, Dolphin evades its jaws but the chase is on.

Where can he hide: not in the deepest depths of the forest for there lurks a Killer Whale.

Now with two huge predators hunting him, Dolphin must dance for his life. Dance, Dolphin, dance.

Then, bang! A huge wave hits the hunters, ‘boom-boom boom-boom.’ Dolphin has a chance to make an escape …

Set in the Western Gulf of California, this dramatic deep sea chase involving a Bottlenose Dolphin, provides a wonderfully rich experience for both ears and eyes – try a telling with an ocean drum. Patricia MacCarthy’s poetic text is full of action and excitement, and her illustrations are amazing.

After an initial reading to savour those illustrations and another to search them for the 36 sea creatures and birds, shown in the final spread, this book, which blurs the boundaries between fiction and non-fiction, offers a superb dance/drama opportunity for a class or group.

One thought on “Dance, Dolphin, Dance”