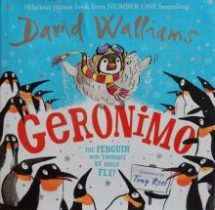 When a new hatchling penguin going by the unlikely name of Geronimo bursts into the snowy world of the Antarctic he’s fuelled by a determination to become airborne, despite his father’s assertions that penguins can’t fly.

His first attempt sees him plunging headlong into the freezing-cold ocean. Unabashed he relaunches himself, this time using a seal’s enormous belly as a springboard, only to nose dive into deep snow.

But Geronimo isn’t ready to give in that easily: he has the ingenious notion of placing his bottom over the blowhole of a whale. This rather reckless rear end rest results in his needing beak-to-beak resuscitation from his pa. 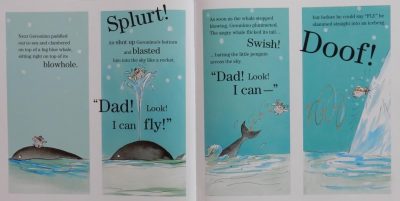 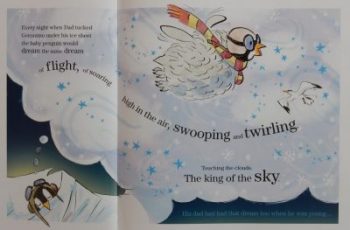 Eventually, the Emperor emperor penguin instructs his Dad to tell Geronimo once and for all he’s to stop trying. But surely that can’t be the end of his aeronautic antics?

Perhaps not, with the collective brains of the colony working overtime …
After all there is more that one way of looking at things now isn’t there? It’s certainly so if you happen to be a yogi, or at least, like the adult penguins in the story, able to stand on your head.

Totally crazy but then this is David Walliams with his off the wall humour. Tony Ross adds his own brilliant touches of zaniness with a sequence of hilarious spreads of Geronimo’s efforts and the optical delusion that finally makes his dream come true.

Hold fast to your dreams – what a great message for young children.