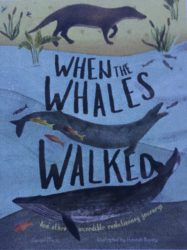 By means of thirteen case studies, readers can discover how for example, dinosaurs evolved into birds and how whales were once four-legged creatures that walked on the land. These are just two of the fascinating evolutionary journeys told through a mix of annotated illustrations by Hanna Bailey, superbly illustrated scenes and family trees.

Did you know that way back in time snakes too had legs and crocodiles were warm blooded?

Written by evolution and earth sciences specialist, Dougal Dixon, this is a book that will broaden the horizons of dinosaur mad readers and, with evolution now a topic in the KS2 science curriculum, it’s one to add to primary school collections.

In his follow up to Timeline, Belgian illustrator Peter Goes takes readers by means of a series of large size maps, on a continent-by-continent tour of all the world’s great rivers.

Factual information – historical, geographical, biological, mythical, cultural – is provided in snippets (the book is translated from the original text by Bill Nagelkerke) through and around which each river meanders from source to sea.

I’ve visited relatively few of the rivers featured (though various parts the River Thames have always been part and parcel of my life and I’ve visited locations along the Ganges). Some including the River Onxy in Antarctica that flows only in summer, I’d never heard of.

This super-sized book has made me want to do some more river exploring; perhaps, like its creator I’ll start closest to home, in Europe.

A fascinating book for young would-be travellers and school libraries in particular.