Here’s a book that leaves you with a warm glow tinged with sadness. Published in time for the centenary of the armistice of the First World War, Michael Foreman presents in his own unique style, the true story of Sergeant Stubby, the dog who served in WW1 and became the most decorated dog of the war.

His story is told by Corporal Robert Conroy, an American soldier who adopts Stubby during training in Connecticut, and with a little help of his friends, manages to smuggle the dog aboard the troop ship and all the way to the front line in France.

It’s a tale that brings home to readers the terrible dangers faced by, and amazing bravery of, those who fought in WW1.

but manages to survive thanks to the care he received alongside the wounded troops and he’s back in action on the day peace is declared. 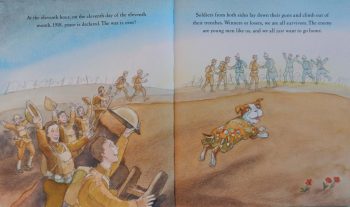 It’s an enthralling read, with a happy ending. Sadly though, that wasn’t the case for so many of the brave soldiers who lost their lives in that a brutal war. It’s so important that we continue to remember these men, particularly now as there are so few war veterans remaining alive. It’s through such superbly told and illustrated books as this that one hopes we will never forget.

Thanks to Foreman’s wonderful scenes, Stubby and his soldier friends will linger in our minds long after this treasure of a book has been set aside.

Share it widely, pause to remember, and give thanks for the contribution those who served in both World Wars made to our all too fragile peace