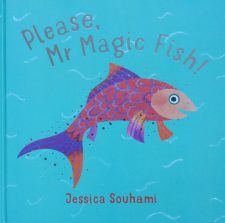 Jessica Souhami has taken the traditional story of the fisherman and his increasingly greedy wife and turned it into something even more magical, tossing in some silver sparkles along the way.

Here the fisherman goes by the name of Jack, and his insulting, constantly complaining wife is Liz.

Their wish to the magic fish Jack catches and agrees to release,

for a ‘small dry cottage, a blue teapot and some bread and cheese in the larder’, once granted, soon won’t do

and escalates first to a large sunny house, then after another week, to a palace full of luxurious items fit for a lord and lady.

Now that obliging fish grants all these wishes without receiving a single word of thanks from the acquisitive couple until finally he’s had enough, so when they return for yet another, instead of making them King and Queen of the land he gives Jack and Liz the biggest surprise of all.

I wonder if they were ever satisfied … Did they learn from the error of their ways? What do you think?

The direct manner of telling as befits the tale works so well as a read aloud and those stylish collage illustrations for which Souhami is renowned are just SO superbly expressive.

If looks could kill, those the fish bestows upon the greedy couple would knock them stone dead in an instant.