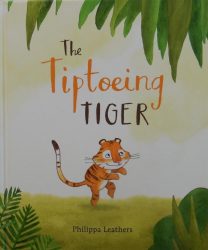 ‘Sleek, silent and totally terrifying’; a creature to avoid when it prowls through the forest; that pretty much sums up a tiger.

Not so Little Tiger though. He’s completely ignored, scares no one with his roars and is laughed at by his big brother. “I don’t think you can scare a single animal in the forest.” declares big bro. but Little Tiger is determined to prove him wrong.

Employing a tiptoeing technique off he goes to sneak up on unsuspecting forest inhabitants, the first being Boar. “I could hear you coming a mile away” says the indolent Boar in response to Little Tiger’s “Roar!!!”

He receives similar disappointing comments from Elephant and the monkeys in a tree.

It’s a sad Little Tiger that acknowledges his own shortcomings but remaining determined he heads to the pond. Surely that frog is an altogether better prospect?  Tiptoe, tiptoe, tiptoe … 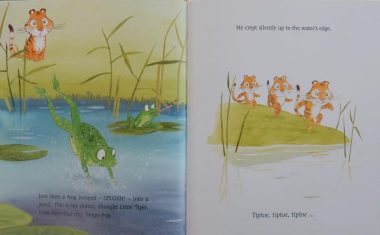 But the only creature that is in the least bit frightened is the Little Tiger looking right back at him from the water.

Job done! Back he goes to report on his success to that big brother of his.

The whole narrative is beautifully understated and perfectly paced; and the pen and watercolour scenes with that gentle touch of whimsy, the tiptoeing sequences in particular, are absolute delight.

Little Tiger is likely to win almost anyone’s affection from the outset but any waverers will surely be won over by his bold final admission.