This is one of a new history series. It’s an engaging look at the Ancient Romans, presented with an exuberance that young readers will find both highly entertaining and illuminating.

Small chunks of information are delivered with a gentle wit, on almost thirty topics. These range from The Birth of the Roman Empire (a comic strip rendering of the Romulus and Remus myth), through emperors …

medicine (herbs and healing baths were prescribed for most illnesses); 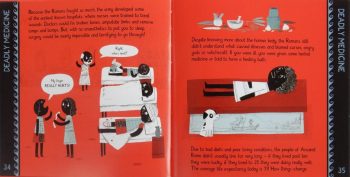 entertainment, (the Romans pitted animals against animals as well as humans; and entry to the Colosseum was free, sometimes even the food came gratis), and ending with the fall of the empire, and a spread on Rome Today.

Throughout, the emphasis is on the visuals: Davies has an off-beat style, uses limited colour to great effect and peppers his illustrations with amusing speech bubbles.

All in all a great introduction for a younger audience, to a fascinating ancient civilisation, the legacy of which is still evident today.

Check out the companion volume ‘Meet the Ancient Egyptians’ too.

One thought on “Meet the Ancient Romans”