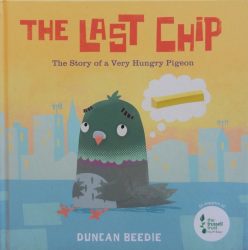 In the light of the recent controversy over rough sleepers in a certain royal wedding town and my concern and distress at the increased number of rough sleepers I observed in Bristol the other day, Duncan Beedie’s latest picture book particularly resonated with me. Actually, the book is set in Bristol and it’s subtitled ‘The Story of a Very Hungry Pigeon’.

Percy is the pigeon’s name and his life on the streets is a tough one. Percy’s patch is the railway station and it’s here that the hungry creature heads at the start of each day in the hope of picking up a few tidbits dropped by commuters.
On one particular morning though, a gang of voracious pigeons has beaten Percy to it. He’s shoved out of the way and ends up with not so much as a single crumb.

With a rumbling tummy, Percy decides to try his luck at the park and off he flies …

only to discover that he’s no match for the greedy ducks that consume everything that’s tossed their way. They certainly have no intention of sharing, so Percy heads to the seaside.
Here too though, he’s insulted and also physically abused by a resident avian, one giant seagull.

In despair, a very weak Percy heads back from whence he came; but dizziness overtakes him and he crash lands onto the city pavement amidst the melee of homeward bound commuters. Dazed and hungry, suddenly, he hears a voice offering him something very special: “Would you like my last chip?” 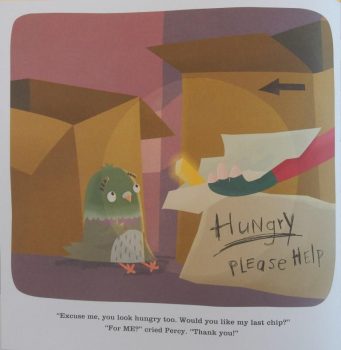 There’s one spot on a street in Bristol that is a whole lot less tough on that particular night.

From his debut, The Bear Who Stared, Duncan Beedie has gone from strength to strength and it’s great to know that 10% of UK profits from sales of this new book will go to The Trussell Trust, which runs some 425 food banks across the UK.
Beadie’s message is a powerful one but he delivers it with a gentle humour and without a hint of preachiness. From his cover illustration, my heart went out to Percy; and the greedy birds, be they pigeons, ducks or that giant seagull, are deliciously nasty characters.
A thought-provoking story that deserves to be shared and discussed widely.