We live in a throwaway, consumer society where the desire for the new, and the notion that the next thing is always better, tend to prevail.
Jeanne Willis and Jenni Desmond have created a timely and eloquent picture book fable that demonstrates the folly of this thinking.
Meet Blue Monster, thoroughly indulged by his parents the never satisfied creature discards them and his new sibling, and takes off with all his money to begin life anew. However although he’s left behind his old life, he’s taken his acquisitive habits with him. 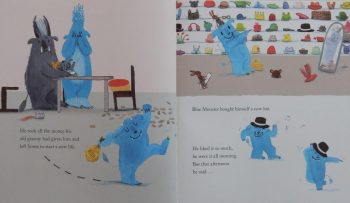 But new hats, cars, luxury palaces, an aeroplane, and a tropical island with amazing animals no less, fail to satisfy.

Even the sunshine itself cannot bring him happiness.
It’s not until he finds himself surrounded by darkness that somehow, in his abject misery, Blue Monster finally realises what he needs for true contentment and well-being. But is it too late?

Jenni Desmond adeptly portrays the monster and his constantly changing moods and emotions – his tantrums, his decadence, his dissatisfaction and his supreme sadness, all of which are part and parcel of Jeanne Willis’ thought-provoking text.
Although we know that the creature has brought in all on himself, you cannot help but be moved by the sight of him in his desolation.
What is most important to you, the latest smartphone or tablet, a brand new car or the love of your family and friends?
Perhaps it takes a powerful picture book such as this, which has as much to say to adults as to children, to make us all stop and think?