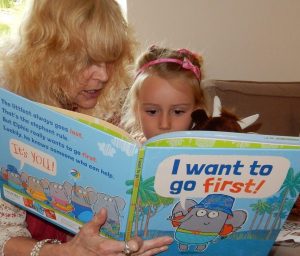 I’ve never quite understood the obsession with being first in a line but it’s something that seems to take hold of children almost from the minute they start school – that’s if they’re made to line up anyway – a teachers’ obsession, often fuelled by parents, and one I dislike intensely.
The whole ‘going first’ thing can make for a fun story though and Richard Byrne exploits its potential for creating humour in his latest interactive picture book.
We join five funkily attired elephants, Elizabeth, Eleanor, Elton, Elgar and Elphie as they’re about to embark on ‘the long march to the watering hole at the back of the book’.
Elphie, the smallest of their number, is always the one that brings up the rear.
On this occasion however, he’s had enough of being last and asks to go in the front of the line. As usual though the response comes, ‘ … the littlest always goes last’.
Elphie isn’t prepared to walk at the back and instead he enlists the help of readers to help him with his plan of action. Help that involves first, shouting … 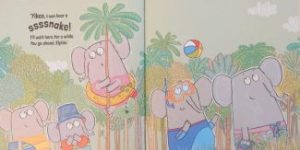 wobbling the book, squeaking and other noise making; all of which serve to get him to second place in the line right behind Elgar, just as they reach their destination where it looks as though we’re about to be rumbled …

Oops! The water hole is already occupied. Now what? Perhaps that squeak-squeak noise might come in useful after all … Could it even make the other elephants rethink their first in line criterion.
Enthusiastic orchestration and demands of ‘again’ were my listeners’ responses to this sizeist tale with its playful attempt to alter the status quo.

One thought on “I Want To Go First!”