Mr Tweed and the Band in Need
Jim Stoten
Flying Eye Books
Prepare for a musical magical mystery tour.
The dapper dog with the super tall top hat returns to carry out further public-spirited acts. Now it’s the members of a band – the very one Mr T. has come to the zoo to hear perform – that have, so their leader Wollo walrus informs him, dispersed around the gardens.
The two begin their search with Pinky Jackson, the guitar playing flamingo; not an easy task on account to the large number of the species; but that of course is where readers come in. Once he’s been located, Pinky …

is more than willing to join the hunt and has an idea where trumpet player, toucan Jimmy Toots might be.

He in turn suggests a possible location for sax. player Mary Lou Lemur; so off they go to the Lost Forest. And so it goes on until Otis O’Rangutan trombonist, iguana, Cool Jules drummer and only reptile (he’s pretty tricky to spot), banjo strummer Jellyfish Jack and four other musicians have been found – just in time for the show. The location of the final missing performer happens conveniently, to be in the busy gift shop, which is also the space wherein the stage is set for the concert.
There the entire ensemble comes together to entertain the crowd and thereafter to bid Mr Tweed a rousing farewell.
There’s an interesting mix of human and animal visitors to the zoo, some scenes of which are presented in a kaleidoscope of psychedelic colours absolutely bursting with activity, while others, such as the arctic pool, are rather more restful on the eye, although equally intricate. Every one though, is absolutely brimming over with talk potential and storytelling material.

The Case of the Stinky Stench
Josh Funk and Brendan Kearney
Sterling
Hold your noses; something malodorous is emanating from a certain fridge, but worry not; Lady Pancake and Sir French Toast have been called back while holidaying on Marshmallow Coast at the request of Inspector Croissant, Sir French Toast’s nephew. They’re on the case right away searching for what it is that’s causing shelves of food to turn bad and pong alarmingly.
Following clues, the three of them set about searching the fridge’s inner landscape: across Salsa Ravine, around smoggy Mount Everbean and through Applesauce River, but still all they discover are false alarms and red herrings. Will they ever get to the bottom of the mysterious stench: perhaps Casserole Cliff might yield the answer …

and if so, how will Inspector Croissant deal with the culprit? 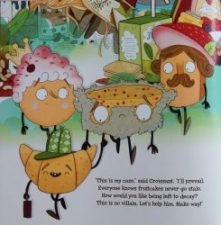 Replete with a culinary vocabulary and served up in a saucy rhyming text and deliciously funny foody scenes, this tale of stinky sleuthing is satisfyingly silly, not least in its final resolution. There’s even a foldout map of the whole search at the end to feast your eyes on.