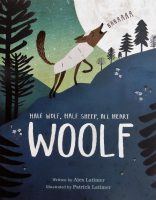 Woolf
Alex Latimer and Patrick Latimer
Pavilion Children’s Books
The trials and tribulations of pretending to be something you aren’t are sensitively and humorously explored in this collaboration between Alex Latimer and his illustrator brother, Patrick.
Part wolf, part sheep, Woolf is the offspring of an unlikely and much frowned upon marriage between a sheep and a she-wolf.

Woolf has both sheep and wolfish characteristics but as he grows older, he experiences an identity crisis. Out exploring one day, he encounters a pack of wolves and as a result decides to rid himself of his woolly coat.
Thus the pretence begins; but inevitably as the wool starts sprouting again, maintaining the disguise becomes tedious and Woolf leaves for pastures new.

Over the hill he comes upon a flock of sheep: again Woolf isn’t true to himself, lying about his wolfish characteristics and then adopting a new ovine look …

Once again, pretence proves unsatisfactory for Woolf and his stay with the flock short-lived.
Convinced he doesn’t belong anywhere, the little creature is distraught and that’s when his parents step in with some timely words of wisdom, pointing out that trying to be something other than your real self can never make you truly happy. Much better to accept and celebrate all that makes you truly special and unique.
Patrick Latimer’s illustrations executed in an unusual colour palette of black, greys, browns, greens, teal, cream and biscuit with occasional pops of purple, blue and pink are delectably droll.
Like me you may well find yourself howling with laughter at Woolf’s attempts to fit in but there is a serious and important life-lesson at the heart of the book: true friends accept and love you for being you.